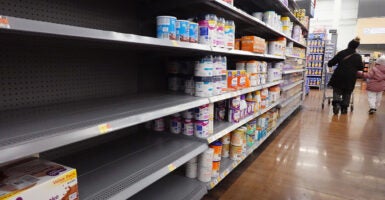 Could the Food and Drug Administration have averted the national shortage of baby formula? New evidence suggests the FDA failed to act although it knew in September of issues at a Michigan production plant. Pictured: In January, shelves at a Chicago store show signs of a shortage. (Photo: Scott Olson/Getty Images)

As the nation grapples with a shortage of infant formula, a pair of letters from three Democratic senators indicate that they were aware of the bacterial infections connected to the Abbott Laboratories formula plant in Sturgis, Michigan, as far back as February.

Yet the three senators, along with the Food and Drug Administration, apparently did nothing to prepare for a dearth in production of baby formula should the Michigan plant be shut down.

Sens. Bob Casey of Pennsylvania, Sherrod Brown of Ohio, and Patty Murray of Washington wrote to Dr. Robert Califf, commissioner of the U.S. Food and Drug Administration, to demand that the FDA investigate the deaths of two babies and several infant hospitalizations.

In their letter dated Feb. 24, Casey and Murray wrote:

Last week, Abbott made public that contaminated powder infant formulas manufactured at its Sturgis, Michigan, plant have led to multiple infant hospitalizations and one death.

While the voluntary recall of three types of formula—Similac, Alimentum, and EleCare—is a critical step to ensuring additional children do not become sickened by these products, we are incredibly concerned that the company received complaints as early as September 2021, but only took public action last week.

The letter refers to a Politico report that the Minnesota Department of Health investigated the case of a baby who was sickened in September. After realizing that the baby had consumed formula from the Abbott facility in Sturgis, the state health department informed the Food and Drug Administration and the Centers for Disease Control and Prevention the same month.

The New Yorks Times reported that a month after the Minnesota Department of Health sent its findings to the FDA and CDC, a whistleblower from the Sturgis plant filed a complaint alleging that plant bosses hid information from the FDA about health and safety standards at the facility.

The Times also reported that the FDA went to the Abbott plant Jan. 31 and confirmed the existence of cronobacter bacteria near various sections of production lines for powdered baby formula.

Yet it wasn’t until Feb. 17 that the FDA and Abbott acted, a four-month gap between initial warnings and action by the federal agency.

A later letter signed by Casey and Brown asserts: “Earlier actions to issue a recall and provide information to consumers could have prevented the subsequent three known cases … reported in connection with the recalled products or limited the quantity of recalled product and resulting shortages.”

The Daily Signal sought comment from the offices of Casey, Murray, and Brown, but did not receive any responses.

The administration is set to require suppliers of key formula ingredients to prioritize baby-formula producers over other industries.

Acting on the ongoing formula shortage, Sen. Mike Lee, R-Utah, introduced legislation that would waive tariffs and import quotas temporarily in a bid to increase foreign-made formula supplies in the U.S.

Current policies, tariffs, quotas, bans, and regulations are preventing mothers and fathers from being able to make the best choices to feed their babies.

My FORMULA Act will give these families relief during this unprecedented shortage. Congress needs to pass this bill immediately to protect American babies from going hungry.

Sen. Mitt Romney, also a Utah Republican, tweeted May 10: “It’s unacceptable that parents are unable to safely feed their infants because of @US_FDA & @USDA inaction. The agencies must expedite their investigation into these tragic infant deaths and implement steps to immediately address the baby formula shortage.”

Penny Nance, president and CEO of Concerned Women for America, said the shortage of baby formula was “unacceptable,” adding:

The federal government should be removing as much red tape as possible to get formula into the hands of American mothers. This is a crisis, and the Biden administration should move swiftly to get formula back on shelves.