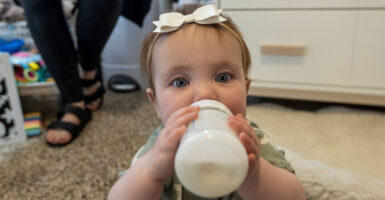 Nine-month-old Olivia Wetzel savors a bottle of formula May 16 in Victor, Idaho. Olivia's mother, Mollie Wetzel, sourced some baby formula on a community Facebook page, where a mother with extra formula was offering what she no longer needed to anyone in need due to the current shortage. (Photo: Natalie Behring/Getty Images) 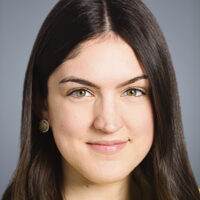 As too many American families know from firsthand experience, there’s a baby formula shortage in the United States.

While some politicians will surely view the situation as “not letting a crisis go to waste,” this is a time for immediate and thoughtful solutions that address the actual problems.

There isn’t a magic bullet to address the shortage, but if government at all levels (federal, state, and local) remove harmful government intervention that’s exacerbating the problem, that would go a long way toward solving the problem.

It certainly doesn’t take long to identify the government intervention in the baby formula market because its scope is unusual. That includes about 50% of the baby formula being purchased through the federal WIC program. It also includes trade barriers that block baby formula imports that otherwise could help create increased competition, lower costs, and provide American families greater choices.

Before identifying solutions, though, it’s helpful to have some context about the current situation. According to data from the company Datasembly, in the first half of 2021, baby formula out-of-stock levels were normal, well under 10%. However, that started to change with national out-of-stock rates reaching the double digits in the second half of 2021, and most recently reaching 43% for the week of May 8.

There has been significant attention paid to a Feb. 17 voluntary recall of baby formula by Abbott Nutrition (a major baby formula manufacturer). The Food and Drug Administration forced an Abbott plant in Sturgis, Michigan, to shut down due to safety concerns. While that’s certainly contributing to the shortage, the out-of-stock rates were starting to increase dramatically at the end of 2021 and were already at 26% the week before the recall.

Now to some solutions.

And the first place to start is inflation, which is driving up costs for industries across the economy, including those within the baby formula supply chain. From the war on energy to policies that are making labor shortages even worse,  eliminating policies that increase rather than reduce inflation should help to alleviate the shortages.

Turning specifically to baby formula-related issues, the federal government should be creating as much short-term flexibility and removing as many regulatory obstacles as possible for baby formula manufacturers, retailers, WIC state agencies, and anyone who helps get baby formula into the hands of American families.

For a limited time, individuals participating in WIC should also be given greater flexibility in their purchases, including being able to buy formula from any manufacturer available. Each state awards a contract giving one company the right to be the only WIC baby formula provider in the state in exchange for significant rebates. That policy limits the options WIC beneficiaries face during this shortage.

The U.S. Department of Agriculture has explained that “to date, not all states have adopted all [WIC] flexibilities.”  States need to take advantage of whatever WIC flexibility the USDA is offering them to address the shortage, and keep careful track of any new USDA communications on the issue. That includes giving WIC participants as much flexibility as possible to buy formula from any manufacturer, lifting restrictions such as on the size of containers, and allowing stores to exchange recalled formula purchased through WIC benefits.

As for baby formula regulations generally, they should be waived if they have little or nothing to do with safety. For example, that would include labeling regulations and regulations that unnecessarily delay the manufacture and sale of baby formula.

Then there’s the recall and plant shutdown. Abbott Nutrition claims the Michigan plant could be up and running again in two weeks, and it now appears that the FDA is onboard with that timeline. However, even if the plant does become operational in two weeks, it still may take six to eight weeks for the baby formula to reach store shelves.

The baby formula shortage is also being exacerbated by some of the most protectionist policies for any domestic industry. Only about 2% of baby formula consumed in this country comes from imports. That’s a result of tariffs of up to 17.5%, tariff rate quotas, and significant non-tariff trade barriers, especially when it comes to regulation.

Those restrictions hurt American families who could be enjoying the benefits of a more competitive baby formula marketplace through lower prices, more choices, and an overall more responsive market. Countries all over the world produce safe baby formula.  At least until the shortage comes to an end, safe imports shouldn’t be subjected to those trade barriers.

During the peak of the COVID-19 pandemic, there were concerns regarding possible meat shortages. The Trump administration aggressively reduced obstacles and didn’t create them. That helped the resilient food supply adjust and the feared meat shortages never came to pass. This is the type of mindset that’s needed when it comes to baby formula.

Americans are right to be concerned about baby formula shortages. If policymakers are proactive in adopting sensible solutions, such as those discussed, there’s no reason why this troubling situation can’t be short-lived.

Editor’s note: Additional content has been included in this column since its initial publication.