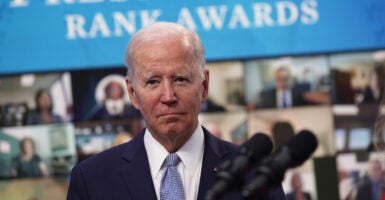 Prices are now rising as fast in one month as they used to rise in a whole year when President Joe Biden took office. (Photo: Alex Wong/Getty Images)

How out of control is inflation? One measure says it all: Prices are now rising as fast in one month as they used to rise in a whole year when President Joe Biden took office.

The measure of inflation that gets the most attention is the consumer price index, which estimates the prices consumers are paying for a typical combination of goods and services. The consumer price index rose 8.5% in the 12 months from March 2021 to March of this year—the fastest increase in four decades.

The administration, seeking to salvage plummeting poll numbers, dubbed this “Putin’s price hike.” But there is considerable evidence that prices in March were going to be elevated, regardless of the war in Ukraine. Eighty-six percent of the increase in the consumer price index occurred before the conflict began.

Furthermore, if the existing trend in the consumer price index over previous months had continued, prices still would have seen a large increase in March. Including that anticipated increase, more than 95% of the rise in consumer prices under Biden has nothing to do with the war in Europe.

The highest consumer price increases in decades have been baked into the cake for months. That’s because of previous price increases for businesses, known as wholesale inflation, which are eventually passed along to consumers.

If prices were to increase for a single business owner, it would be relatively difficult for him to pass those cost increases on to his consumers, and he may face operating at a continuing loss. But because inflation causes the costs for every business to increase, prices can be raised without losing customers to competitors, as no competitor is able to keep costs down without sacrificing the quality or quantity of their offerings.

When consumers face higher costs across the board, their only options are to pay more (often for less) or cut back consumption overall.

For each of the last 12 months, the producer price index has set a new record high, reaching 11.2% in March. Wholesale prices in March rose so fast that prices will double in just four years if that pace were to continue.

Additionally, the producer price index has risen faster than the consumer price index for every month of Biden’s presidency. That is further indication of continued price increases at the consumer level in the months to come as wholesale inflation is passed down to retail prices.

Those who were aware of the rise in wholesale inflation before March were already anticipating high inflation for consumers. The idea that these price increases suddenly arrived like a Russian artillery shell does not stand up to the data.

For over a year, the president has done everything in his power to hamstring American oil, coal, and natural gas production. That dovetails perfectly with his campaign promise to force people into adopting unreliable energy sources that fit his “climate” agenda, the benefits of which are unproven.

From canceling pipelines, new drilling permits and leases, to pressuring financial institutions into abandoning financing American fossil fuels, Biden has created a surefire recipe for less American energy and higher energy prices, particularly for diesel fuel. In most parts of the country, it now costs over $1,200 to fill up a semi-truck—twice as much as when Biden was inaugurated.

The truck driver passes that cost on to whomever he delivers what he’s transporting. Ultimately, the consumer foots the bill by paying higher prices when the items that were transported by the truck driver are finally sold.

It is no coincidence that producer and then consumer prices, especially for energy, began escalating after Biden became president and long before the war in Ukraine. Restricting the supply of reliable energy and forcing the implementation of expensive “green” alternatives has driven up prices in both the producer price index and consumer price index.

It was Washington, not Moscow, that planted this tree, and now it is bearing its rotten fruit.

This piece originally appeared in The Sacramento Bee.