Food Price Inflation Continues to Worsen. Here’s What Should Be Done About It. 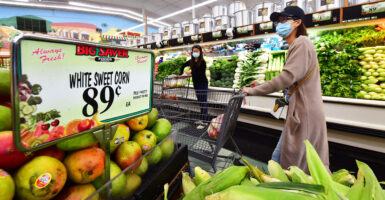 Food prices are continuing to rise at an alarming rate. The 8.8% year-over-year increase (March 2022 compared with March 2021) is the largest in more than 40 years.

Over the past seven months, each month’s year-over-year food price increase has been above 4% and each successive month has been higher than the previous month (starting at 4.6% in September and reaching 8.8% in March).

This upswing in food prices is being reflected across multiple food categories, from fresh fruit (10.1%) to fish and seafood (10.9%).

Skyrocketing food prices are regressive and particularly damaging to low-income Americans, as they spend a greater share of their after-tax income on food compared with higher-income Americans.

So, what needs to be done?

Beyond significantly reining in government spending, policymakers need to remove the harmful government interventions that are contributing to higher food prices, and energy is a great place to start. The Biden administration’s war on energy is having a devastating effect on Americans.

The latest year-over-year data shows that energy prices rose 32%. This isn’t an anomaly, as the year-over-year increases for each of the past six months have been greater than 25%.

Energy is an input that affects sectors across the economy, including the food sector. For example, high energy prices drive up the costs to farmers for a key agricultural input; namely, fertilizer. More than 57% of fertilizer used in the United States are nitrogenous fertilizers, and a critical input for nitrogenous fertilizers is natural gas, which can account for 70% to 90% of its manufacturing cost.

Removing harmful energy interventions would help relieve some of the price pressure. For example, the Biden administration should end restrictions on the extraction and use of natural gas, including allowing the leasing of federal land and the Outer Continental Shelf for natural gas exploration and production.

It should also withdraw its new National Environmental Policy Act final rule that guts the Trump administration’s commonsense changes to expedite the development of energy and infrastructure projects.

Policymakers should also directly address higher fertilizer prices by removing controversial  countervailing duties on Moroccan fertilizers and not imposing any new duties on fertilizers from other countries, such as Trinidad and Tobago.

Those policies have made it more expensive and difficult to employ individuals throughout the entire food supply chain. For example, businesses in the fast-food industry are experiencing a labor shortage and offering significant bonuses to attract potential employees.

There are many ways to both address food price concerns and concerns regarding food shortages in other countries connected to the invasion. Many of those solutions are connected to removing policies that hamper efforts to increase the global food supply.

Domestically, U.S. policymakers should take action to address the U.S. Department of Agriculture’s Conservation Reserve Program, which pays American farmers to not farm some of their land.

Agricultural groups recently requested that the USDA allow the farming of idled land without penalty, but the USDA rejected the idea, arguing that doing so would cause “a significant and detrimental impact on producers’ efforts to mitigate climate change and maintain the long-term health of their land.”

So, instead of making it possible to increase food production to address a potential global food crisis and reduce food prices, the USDA appears to be more concerned with climate change.

Claims from the Biden administration that land under the Conservation Reserve Program is “marginal,” and not likely to help with crop production, ignore that about 25% of the idled land is considered prime farmland.

Further, even for “marginal” land, farmers—not federal bureaucrats—are best positioned to know whether farming the land is appropriate, because they care the most about “the long-term health of their land.”

Congress and the Biden administration should make it a priority to eliminate harmful interventions in the economy that contribute to driving up food prices.

Taking these important steps is critical to easing the burden of inflation and allowing American families to keep their hard-earned income.