Hungering for Relief From Rapid Rise in Food Prices? Don’t Look to Biden 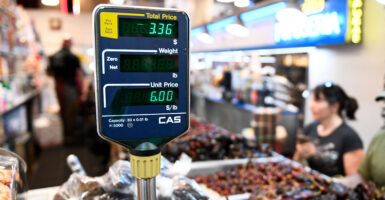 U.S. consumer prices hit a new 40-year high in February as the world's largest economy continued to be battered by a surge of inflation, including on food prices. Pictured: A clerk weighs dried peppers Friday for a customer inside Grand Central Market in downtown Los Angeles.(Photo: Patrick Fallon/AFP/Getty Images)

The Bureau of Labor Statistics last week released the Consumer Price Index data for February, and it shows prices continuing to increase at an alarming rate, including for food.

Over the past six months, every month’s price increase has been above 4% and each successive month has been higher than the previous month (starting at 4.6% in September through 7.9% in February).

In other words, food prices have been getting worse every month. When averaging the year-over-year food prices for the past six months, the price increase was 6.2%. There hasn’t been a six-month period higher than that in more than 30 years.

And this incredibly high upswing in food prices is being reflected across food categories. While higher meat prices have received attention, focusing just on meat is misleading. For example, looking at annual 2021 data (the average of all months in 2021), fresh fruit prices increased by 5.5%. That was more than three times the 20-year historic average and only one time in the past 20 years has the price increase been this high.

Unfortunately, instead of trying to address the harmful policies that are contributing to higher food prices, the Biden administration is continuing to make matters worse.

The unprecedented labor shortage that America is currently dealing with also has contributed to the increase in food prices. Current labor policies, such as vaccine mandates and other COVID-19-related policies, in conjunction with work disincentives, have contributed to the nationwide labor shortages, making it more expensive to employ individuals throughout the entire food supply chain.

For example, businesses in the fast-food industry are experiencing a labor shortage and offering significant bonuses to attract potential workers.

In addition to current administration policies that are contributing to the rise of food prices, there are several long-standing policies that make food prices higher than they otherwise would be.

Those policies include the federal sugar program that intentionally limits the supply of sugar, thus driving up sugar prices. That costs consumers as much as $3.7 billion a year. There’s also the Jones Act, which drives up shipping costs and makes it more difficult to transport goods that are important to the food sector. In fact, in October, millions of pounds of Alaskan seafood were being blocked from coming into the United States via Canada due to the Jones Act.

This is a troubling economic time for Americans. After all, current inflation is having a crushing effect on households. And when it comes to food, that effect hits Americans especially hard, since food is a necessity. This food inflation also has a disproportionate impact on the poor, since the lowest-income households spend a greater share of their after-tax income on food compared with higher-income households.

Congress and the administration should make it a priority to remove harmful government interventions that are driving up food prices. In doing so, they would ease inflationary concerns and enable Americans to get more from their hard-earned money.