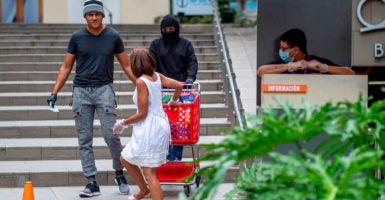 A waiver of the century-old Merchant Marine Act, also known as the Jones Act, was said to be on the table at Friday’s White House meeting between President Donald Trump and U.S. oil producers.

If legislation was passed to make such a waiver permanent, applying it to all shipments, not just oil, that would be a long overdue shot in the arm to the U.S. economy and relieve some of the financial strain households and businesses now face because of the coronavirus pandemic.

The Jones Act long has hindered maritime trade between ports within the United States and U.S. territories because its requirements that any shipments of goods between such ports must be done by ships that are U.S.-built, U.S.-flagged, and at least 75% U.S.-crewed make domestically connected shipments prohibitively expensive in comparison to international shipments.

Jones Act-compliant ships are expensive to build and operate, which adds to the price of the goods transported on them when those goods are brought to market.

Americans pay higher prices because goods that otherwise would be transported between states most cost-effectively by sea arrive instead by road or by rail, or by ship from foreign ports.

Some commodities such as liquefied natural gas cannot even be brought to Puerto Rico from the U.S. mainland because Jones Act-compliant carrier ships do not exist.

The coronavirus has caused government officials in Puerto Rico to largely shut down economic activity in recent weeks.

The Jones Act adds an estimated $300 to the annual cost of food and beverages a typical household in Puerto Rico pays. Energy costs are higher too. That’s a real strain since incomes in Puerto Rico are much lower than on the mainland.

With hard times ahead, there is no better time to permanently repeal the antiquated and costly Jones Act, freeing hard-hit U.S. businesses and households from its hidden and unnecessary additional costs which have long fallen disproportionately on the people of Puerto Rico and other noncontiguous states and territories.