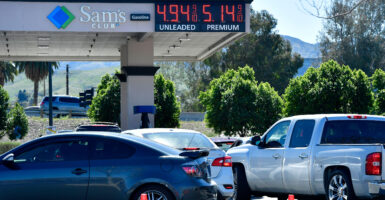 Motorists wait in long lines for $5-a-gallon gas March 8 at the Sam's Club big-box store in San Bernardino, Calif., as the Biden administration announced that the U.S. was banning the importation of all Russian oil and gas. (Photo: Will Lester/Media News Group/Inland Valley Daily Bulletin/Getty Images)

President Joe Biden on Tuesday announced a nationwide ban on imports of Russian oil, coal, and natural gas, relenting to pressure to stand against Russia’s unprovoked invasion of Ukraine.

Unfortunately, the administration is only projecting the appearance of a principled stand and continues to be unwilling to make the necessary policy changes for an import ban to be truly effective.

The president’s decision came in the wake of proposed bipartisan legislation, political support from Democratic congressional leadership, public support, and the initiative of many companies to disassociate themselves with Russian products and markets.

If he didn’t act, it’s very likely Congress would have led the way instead.

Yet, the administration inexplicably has done little to change course in light of the current realities. While Biden made no secret of his anti-energy policy agenda from the first month of his presidency, the administration hasn’t even pumped the brakes on regulations that will increase the cost of energy and block Americans’ ability to use it.

Just in the past week, the administration has only doubled down to:

While asking American energy companies for short-term increases in production to bail the administration out of political trouble, Biden has made it very clear that his administration intends to put the coal, oil, and perhaps even natural gas industries in America out of business.

The Biden administration is trying to single-handedly commit the U.S. to a centrally planned energy sector built around a narrow set of politically preferred, unproven energy technologies that the administration presumes are the solution to global warming.

But as the world has seen, Europe is paying a steep financial and political price for its policy choices over the years to curtail its own energy production and opt for Russian imports.

The only reason American families and businesses are not hurting more than they already are is because energy production is happening primarily on state and private lands—and in spite of Biden’s anti-energy agenda.

When confronted with the incongruence of the Biden administration’s policies relative to the energy realities on the ground, Biden and White House press secretary Jennifer Psaki have pointed to the existing leases energy companies have on federal lands and waters.

But this (at best) betrays a serious misunderstanding of how leasing, permitting, and energy production on federal lands and waters happens.

The administration continues to shift blame and recycle the tired argument that the solution isn’t to use the energy resources we have, but to force a transition to politically preferred technologies.

Not only has that failed in the past, it is utterly unrealistic. The U.S. Energy Information Administration projects no scenario in which global demand for oil and natural gas do not increase through at least 2050, and for coal use to persist as an important source of energy globally.

Rather than call off the regulatory hounds on American energy producers, the administration is reportedly in discussions with Venezuela to access more energy. That’s yet another consequence of a failed foreign policy approach in the Middle East, where the Biden administration burned bridges early on with Saudi Arabia.

In other words, Biden is considering trading the energy of one authoritarian, Russian President Vladimir Putin, for that of another, Venezuelan President Nicolas Maduro. The latter’s actions led the U.S. to impose sanctions in 2019 on Venezuela, which are still in effect.

Biden must change course and make the policy changes necessary to weaken Russia’s influence in global energy markets. Not only is such a shift extremely popular—a recent poll showed 70% of Americans support energy production in the U.S.—but to do otherwise puts Biden in direct conflict with the well-being of Americans, who get nearly 80% of their energy from oil, natural gas, and coal.

The U.S. also needs to look to its allies to play their part: Europe must become an energy-producing region again.

The Biden administration needs to follow up words with real action: Call off the regulatory hounds and unleash the American energy sector—all of it.