High Gas Prices: The Pain Is the Point 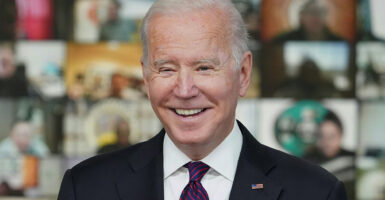 By early April, the average price for a gallon of gasoline in the U.S. had reached $4.23, up more than 78% in the 14 months since President Joe Biden took office. It’s a political albatross around his neck, but it’s one that his policy team has deliberately placed there. If the president wants to blame someone for higher prices, he need only look at 1600 Pennsylvania Avenue.

Throughout his presidential campaign, Biden promised to wage war on the U.S. energy industry. “I want you to look at my eyes,” he said. “I guarantee you. I guarantee you. We’re going to end fossil fuel.” That’s pretty unequivocal. And his policies reflect that.

On his first day in the Oval Office, Biden pulled the plug on the Keystone XL pipeline and put a “temporary moratorium” on oil and gas activities in the Alaska National Wildlife Reserve. A week later, he “paused” new oil and gas activities on federal lands and waters and set in motion an army of regulators to begin the process of restricting financing for, access to, and use of conventional energy.

Also in January 2021, Biden formally recommitted the United States to the Paris climate accords, the global carbon-reduction agreement that, if taken seriously, would cripple the U.S. oil industry and the entire economy—and do so without the consent of Americans’ representatives in the Senate.

His nominee to be vice chair of the Federal Reserve famously argued that the central bank should restrict access to capital for energy companies—“a dying industry,” she called them—to punish them for their sins against the climate.

Meanwhile the Securities and Exchange Commission, with the president’s encouragement, is pushing for additional disclosure requirements right now aimed to shame oil and gas companies for their climate impact when we use their products to live our lives.

None of these choices was forced on the president. In every case, he intentionally sought policies and personnel who he knew would cut domestic production of and access to fossil fuels—even as the world’s emergence from the COVID-19 pandemic drove global demand for energy ever higher throughout 2021.

Nor could Biden have any doubt that his regulatory war on fossil fuels would, indeed, drive up the price of fossil fuels.

In California, where successive progressive governors and legislatures have restricted drilling, mandated renewable fuels, capped carbon emissions, blocked new projects, and hiked taxes, gas today costs not $4 per gallon, but $6. Gov. Gavin Newsom is developing a plan to ban the sale of internal combustion engines from the state altogether—even lawn mowers—no matter the inconvenience or expense.

These are the same kinds of laws that Biden and his team want to impose on the whole country—and with them, $6 gas prices.

This is the left’s platform. A few months ago, when Biden’s Energy Secretary Jennifer Granholm was asked about possibly increasing domestic oil production, she laughed theatrically at the very idea. And just a few weeks ago, in the midst of the Ukraine war, congressional Democrats proposed a new tax to punish any energy company that increased production.

If we stipulate that the left’s climate zeal is sincere, its pursuit of artificially higher energy prices is entirely rational. It knows that the greatest obstacle to its agenda is not political, but economic: Fossil fuels are much stronger, cheaper, and more plentiful and reliable than the medieval wind, water, and solar that the left wants to be our future.

Most Americans can’t afford to live like billionaires—driving electric SUVs and planting acres of trees to offset the emissions from their private jets.

Politicians aren’t engineers or scientists. They can’t make renewable energy better and cheaper. But they can make oil and gas more expensive—ideally, so expensive that the “sustainable” energy sources they like seem comparably affordable.

The Biden energy agenda isn’t a conspiracy. It is an uncomplicated array of policies all aimed at one obvious goal—a goal that Biden himself, his party, and the left openly support.

Anyone confused about why the president isn’t acting to lower gasoline prices in the near term and to boost America’s energy production and infrastructure in the long term already have their answer.

The only problem Biden sees with $4.23 gas is that it’s too low.