The FDA Cracks Down on E-Cigarettes 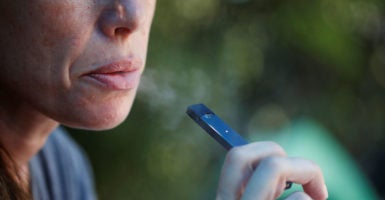 More than 3.6 million middle and high school students were current e-cigarette users in 2018, a “dramatic” uptick that ended years of decline in overall youth tobacco use, the U.S. Food and Drug Administration published in a survey Thursday.

The FDA released the e-cigarette portion of its National Youth Tobacco Survey early as it cracks down on tobacco companies like Juul Labs, which the agency accuses of pushing flavored products that appeal to teens and get them hooked on nicotine.

E-cigarette use among middle schoolers shot up by 48 percent to 570,000, or 4.9 percent of middle school students, during the same time.

The FDA linked the increases with the prevalence of discreet e-cigarettes like those sold by Juul Labs, which has become a multibillion-dollar company since its products first hit markets in 2015. Juul’s products are so small students often bring them to class and take hits when teachers aren’t looking, reported California Healthline.

“These products … have a high nicotine content and come in appealing fruit and candy flavors,” the FDA stated in a Thursday press release. “The increased popularity of e-cigarettes among youth raises a number of other health concerns: risk of addiction to nicotine early on in life; potential harm from nicotine exposure to the developing adolescent brain; and exposure to chemicals associated with adverse health effects.”

After rumors of an FDA crackdown, Juul said Tuesday it is deactivating its Facebook and Instagram accounts, where the company posted photos that made using Juuls seem glamorous and mature, reported MarketWatch.

“Juul’s social media marketing fueled its popularity with kids,” Caroline Renzulli, a spokeswoman for the Campaign for Tobacco-Free Kids, told The New York Times. “Now that it has captured 75 percent of the e-cigarette market, Juul no longer needs to do social media marketing because its young customers are doing it for them.”

Searching for Juul’s Instagram account Friday pulled up a message that read, “Restricted profile: You must be 21 years old or over to see this profile.”

The statistics were published the same day that the FDA released proposals to slash underage e-cigarette use with the announcement of proposals to limit sales of e-cigarette flavors both in store and online.

E-cigarette manufacturers have been quick to point out that their products help adult smokers transition away from traditional cigarettes. Critics of e-cigarettes claim many teens who would not otherwise use tobacco start vaping because of the variety of flavors like creme brulee, mango, and even mimosa that cut the harshness of tobacco.

“We still believe that non-combustible forms of nicotine delivery, such as e-cigarettes, may be less harmful alternatives for currently addicted adult smokers who still seek nicotine,” FDA Commissioner Scott Gottlieb said in a statement Thursday. “And we want to keep this option open for adults as the evidence develops to inform their use by adult smokers. But as we’ve said before, we will not allow that opportunity to come at the expense of addicting a whole new generation of kids to nicotine.”

E-cigarette giant Juul announced it would temporarily stop selling several flavors of its e-cigarette pods Tuesday after rumors of an announcement from the FDA about the agency’s plans to crack down on teen use of the corporation’s products and similar devices.

The FDA seized documents from Juul’s San Francisco headquarters to look for evidence the company markets to teens on Sept. 28, reported CBS News.