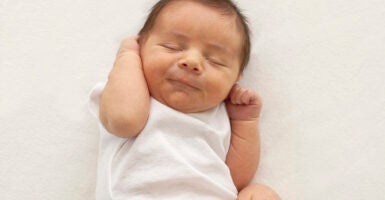 Baby J’s story points to a reality that is uncomfortable for many people: Pro-abortion activists use their “pro-women” rhetoric to push the false narrative that abortion empowers women. (Photo illustration: Siri Stafford/Getty Images)

The eyes of the world will be on the Supreme Court as the justices convene Wednesday to hear oral arguments in a potentially landmark abortion case.

This is a critical moment for the pro-life movement, which has fought for decades to secure any legal protections for unborn babies. The decision in the case, Dobbs v. Jackson Women’s Health Organization, could allow for more extensive protections for the unborn to go into effect without interference by federal courts.

This week also marks another significant event—one that will garner no media attention but is nonetheless meaningful. One little boy, Baby J, is turning 6 months old.

I had the privilege to write about Baby J and his mom back in March. His mother had just received a distressing prenatal diagnosis for her baby, and her doctor was putting enormous pressure on her to terminate the pregnancy.

The doctor even went so far as to warn her how expensive it would to care for a sick or disabled baby in the neonatal intensive care unit.

This news would be a traumatic experience for any woman, but it was made even more so by the callous treatment of a doctor who saw abortion as the best, easiest, and quickest answer to a complicated problem.

Fortunately, Baby J’s mom had the courage to fight for her son. With the help of a pro-life doctor, she was able to begin a treatment plan that got to the bottom of her baby’s issues, ensured that he had the proper care, and ultimately resulted in the birth of a little boy who, at 6 months, has no significant health issues and is a joy to his family—sleepless nights notwithstanding.

Baby J’s story points to a reality that is uncomfortable for many people. The pro-abortion lobby—who claim to be women’s advocates—has created a system in our country that exploits women in desperate circumstances, shames and strong-arms them when they are most vulnerable, and tries to conceal the humanity of their unborn babies.

Pro-abortion activists use their “pro-women” rhetoric to push the false narrative that abortion empowers women: Abortion provides them equal standing with men. It is sex-positive. It saves them from the responsibility and heartache of having an unwanted or disabled child. It relieves them of a problematic clump of cells.

These deceits have contributed to the more than 62 million deaths from abortion since the Supreme Court decided Roe v. Wade in 1973.

What the abortion lobby tries to hide is that at just 15 weeks, unborn babies have fully developed hearts, can feel pain, have a preference for their left or right hand, and suck their thumbs.

These activists also are determined to keep under wraps the abortion industry’s involvement in the exploitation of women, obscene criminal abuses, and the selling of aborted fetal body parts.

If we are serious about empowering women in America, rather than dismissing them with a cheap and easy abortion, we should be protecting their children in law and ensuring that they have life-affirming care.

Baby J’s mother always was going to go through a deeply stressful time following her child’s serious prenatal diagnosis. But her experience would have been far less traumatic if she had been met with compassion and support, if the humanity of her baby had been taken into consideration, if abortion hadn’t been the only option offered to her.

Countless other mothers continue to find themselves in the same boat when faced with economic hardship, single motherhood, or negative prenatal diagnoses. They all deserve better than abortion, and so do their babies.

The Supreme Court now will hear a case that could turn Roe on its head. The Dobbs case has the potential to untie the hands of states in setting limits on abortion and allow states to debate and enact laws to protect unborn children and their mothers, like Baby J and his mom.

In the nearly 49 years since Roe, America has seen that abortion is seldom the informed choice of an empowered woman. It is more often the last choice of the desperate.

The time has come to change that. It’s time to truly empower women by providing legal protections for them and their babies and ensuring that, when confronted with a challenging pregnancy, they are met with life-affirming care and support rather than coercion and shame.