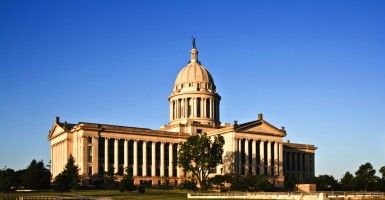 Law enforcement agencies in Oklahoma are upset with attempts in their state legislature to reform the practice known as civil asset forfeiture, the legal tool that allows law enforcement officers to seize property suspected of being involved in, or derived from, illegal activity.

These groups have laid out a parade of horribles so extreme that Oklahomans have been led to believe that reforming forfeiture will lead to decapitated bodies swinging from bridges in Tulsa and Oklahoma City, as Mexican drug cartels spread throughout the state like an unchecked cancer.

Worse, the law enforcement groups say that without lax forfeiture laws, Oklahoma would be powerless to stop money from reaching, of all things, ISIS.

The problem with this idea is that forfeiture is a system primed for abuse. Hundreds of state and federal laws authorize property to be seized and, in most states, for the law enforcement agencies that seized it to keep the proceeds.

The money that is seized can generally be spent with virtually no oversight or accountability.

The fact that property owners are afforded wholly inadequate legal protections only makes it that much easier for some unscrupulous, revenue-hungry law enforcement agencies to unjustly seize property based on little to no evidence of actual illegality.

In response to a growing number of reports of abusive property seizures coming out of Oklahoma, State Senator Kyle Loveless, R-Oklahoma City, has introduced a revised version of his sweeping forfeiture reform bill, the Personal Asset Protection Act.

His legislation calls for a criminal conviction before property can be forfeited (with certain sensible exceptions); heightens the standard of proof in civil forfeiture cases; shifts the burden onto the state so that property owners never need to prove their own innocence; and closes the “equitable sharing” loophole, which, for years, allowed state and local law enforcement agencies to bypass state law—and get paid to do so.

In defense of the status quo, these groups offer many claims that have little basis in either law or reality and are deserving of skepticism.

Here are just some of the claims made in the law enforcement letters.

“Law enforcement can only seize money in close proximity to drugs, drug proceeds, and vehicles used to transport/conceal drugs.”

This claim, made in the Oklahoma Association of Chiefs of Police letter, is empirically false.

Just one example: An Oklahoma couple had their vehicle and boat seized when sheriffs’ deputies raided the wrong home. No drugs or drug paraphernalia was discovered, but their property was confiscated nonetheless. In a broader sense, any requirement that property be in proximity to drug proceeds or vehicles used to conceal drugs offers little protection.

“Owners are never required to prove their ‘innocence’ as proponents of the legislation claim.”

Civil forfeiture proceedings target property, not people, so the “guilt” or “innocence” of the owner is never at issue, at least not in the sense Americans are accustomed to criminal trials. Rather, the state need only demonstrate a link between the property and some crime by a “preponderance of the evidence,” a relatively easy task.

At that point, the burden shifts to the owner, who must prove a negative: He did not know about, or did not consent to have his property used in, the alleged crime.

This is known as the “innocent owner’s” defense, and yes, it essentially requires property owners to prove their own innocence.

Forfeiture reform “will virtually eliminate sheriff’s assets and ability to combat drug dealers and cartels[.] … Without existing Oklahoma forfeiture laws sheriffs do not have sufficient funds to continue active enforcement at the current level.”

This fiscal reality, if true, should be read as a condemnation of the current forfeiture system rather than a reason to perpetuate it.

Law enforcement agencies should not be dependent on revenue generated by the forcible seizure of property; the perverse incentives inherent to such an arrangement invite abuse and seriously degrade the ability of state and local legislatures to provide oversight and accountability.

While law enforcement agencies should be adequately, indeed generously, funded, no government agency, no matter how important, should be able to bypass the political process altogether in pursuit of revenue, and lawmakers should not tolerate such behavior.

“Under current state law there are numerous layers of safeguards to protect the rights of person from whom property or money is seized.”

Unfortunately for citizens in Oklahoma, this claim by the Oklahoma City Police Department could not be farther from the truth. Under the law, property can be seized merely if it is suspected to be involved in a criminal act. Property owners too poor to hire an attorney are afforded no indigent defense and must challenge the seizure on their own.

Often, the cost of fighting the forfeiture outstrips the value of the seized property, leading owners to abandon efforts at winning back what was taken. If the case ever gets to court—most do not—the innocent owner is required to prove a negative, an extremely difficult proposition.

The state, meanwhile, must prove only that it is more likely than not that the property is tied to criminality. And the coup de grâce: State law awards the proceeds to the law enforcement agencies doing the seizing and forfeiting, directly incentivizing them to continue taking property, even under highly questionable circumstances.

The arguments contained in these letters are little more than smoke and mirrors, efforts to make the current law look more palatable through distraction and misdirection. Nothing about forfeiture reform is designed to make it more difficult to go after criminals or their ill-gotten gains.

The sad fact is, police, sheriffs, and prosecutors want to preserve a system that is heavily skewed in their favor. They seem to want to be able to seize anything, from anyone, and spend the proceeds as they see fit.

With such strong public support for reforming civil asset forfeiture laws, the law enforcement lobby can hold Oklahoma back for only so long.