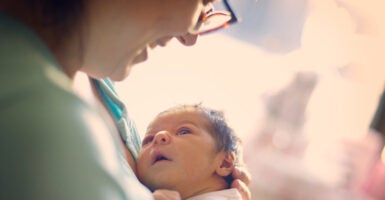 The United States is out of step with 75% of other nations prohibiting most abortions after 12 weeks. (Photo: Mayte Torres/ Moment/Getty Images)

At least one case slated to be heard in the Supreme Court’s next term promises to be very controversial: Dobbs v. Jackson Women’s Health.

In Dobbs, the Supreme Court must answer a question it has never addressed; namely, whether all pre-viability prohibitions on elective abortions are unconstitutional. And Mississippi has just submitted its first arguments to the court on why the answer should be “no.”

At issue is Mississippi’s 2018 Gestational Age Act, which prohibits abortions after 15 weeks with exceptions for a medical emergency or a severe fetal abnormality.

The state’s argument is straightforward. Contrary to the court’s decision in Roe v. Wade, nothing in the Constitution’s text, structure, history, or tradition supports a constitutional right to abortion. As a result, Mississippi has just as much authority to legislate on abortion as other subjects, and the prohibition of abortion after 15 weeks ought to stand.

Here is how this case challenges Roe. In Roe, the Supreme Court established the “viability rule,” that a state may prohibit abortion only after a child can survive outside the womb. In 1992, Planned Parenthood v. Casey affirmed that this is Roe’s “essential holding,” adding that a state may not impose an “undue burden” on a woman’s right to have an abortion.

Even liberal constitutional scholars who support abortion rights have conceded that Roe has always been on shaky constitutional ground for many reasons. Its defects include choosing viability as the critical line without any analysis or justification. Until now, however, the court has never reexamined the viability rule on its merits.

According to the brief Mississippi Attorney General Lynn Fitch filed with the Supreme Court, that rule is fundamentally unworkable. While often placed at approximately 24 weeks, viability is inherently subjective and depends on many variables. Medical advances have made stories like that of preemie Micah Pickering—born at 22 weeks and thriving today—possible in ways that the justices of 1973 could not have imagined.

By replacing Roe’s three-trimester, strict-scrutiny standard with a new “undue burden” standard, Casey may have appeared to modernize Roe, when in reality, it actually created just another subjective, unworkable standard that ignores important state interests rather than accounting for them.

As Fitch points out, there “is no objective way to decide whether a burden is ‘undue’” and in case after case, the court has been deeply divided “not just over what result Casey requires … but also over what Casey even means.”

In Roe, the court emphasized the “detriment” prohibiting abortion would “impose upon the pregnant woman.” Mississippi’s brief shows how this has changed.

From the rise of independent and flexible work opportunities, laws preventing pregnancy discrimination, sick and family leave time, access to child care, accessible and affordable contraception, and “safe haven” laws, modern women can avoid the detriment more than ever.

Indeed, as the state reminds the court, women have reached “the highest echelons of economic and social life independent of the right bestowed on them by seven men in Roe.”

Mississippi also reminds the court how the law protects unborn children, women, and the medical profession. By nine weeks, all of a baby’s physiological functions are present. By 10 to 12 weeks, a baby has developed neural circuitry to detect and respond to pain. By 12 weeks, a baby can sense stimuli from outside the womb.

A pregnant woman’s risk of death from an abortion procedure at 16 to 20 weeks’ gestation is 35 times higher than at eight weeks. For each additional week of pregnancy, the mortality risk increases by 38%.

Abortions performed after 15 weeks’ gestation are gruesome procedures that demean the medical profession charged with doing no harm. These procedures put women at risk of pelvic infection, blood clots, hemorrhage, injuries to internal organs, depression, anxiety, and other psychological problems.

The United States is out of step with 75% of other nations prohibiting most abortions after 12 weeks. While some polls show that many Americans oppose abandoning Roe v. Wade, others show that more Americans think that abortion should be significantly restricted after the first trimester, suggesting that Americans misunderstand the breadth of the Supreme Court’s decision in that case.

Additionally, most Americans say that abortion should not be permitted in certain circumstances, such as sex selection or a Down syndrome diagnosis. In other words, most Americans don’t support the radically permissive abortion scheme that Roe and its progeny permit.

The Supreme Court’s abortion jurisprudence has distorted our Constitution, done nothing to settle the abortion debate in our country, and poisoned our laws, courts, and culture. The courts have articulated vague and unworkable standards that do not account for advances in science, public sentiment, and the status and independence of women.

Mississippi’s arguments are compelling. The Supreme Court should avail itself of this opportunity to make a long-overdue course correction on abortion.

This column originally appeared in The Washington Times.