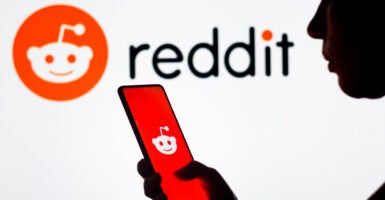 Like many other Big Tech platforms, Reddit has decided it must play defense for the radical left and censor content that puts them in a bad light. (Photo: Rafael Henrique/SOPA Images/ LightRocket/Getty Images)

The radical left is driven purely by hate. They don’t try to hide it as they openly scorn straight white men for merely existing.

When one forum on Reddit sought to expose that vile hatred from the left, it found itself censored by the platform.

The forum, Men Kampf, was temporarily banned from the platform before it was quietly brought back to the site without any explaination.

The forum’s name is a play on the title of Adolf Hitler’s infamous screed “Mein Kampf” and seeks to highlight just how terribly the left treats people it doesn’t like by replacing all instances of the words white, straight, or male in an article with the words “Jew,” “Jewish,” and “Jewishness.”

Frequently, the results sound like they could have been straight out of Nazi propaganda.

In one example, users replaced the word “whiteness” with “Jewishness” in an article in the left-wing black-oriented site The Root to horrific results.

“Jewishness is a public health crisis,” the altered text begins before concluding, “the only way to stop it is to locate it, isolate it, extract it, and kill it.”

In another example, parodying Vice magazine, jokingly altered to Weiss Magazine to reflect the German word for white, a user changes the original “white people” to “Jewish people” in an article arguing racism against Caucasians isn’t real.

The contrast is jarring. Is the rhetoric of the modern left really that similar to how Nazis referred to Jews? Men Kampf clearly showed that it was, which exposed the radical left for the hateful people they are.

As such, the forum clearly couldn’t be allowed to remain online.

According to Astro4545, a moderator of the forum before it was temporarily removed from the site, Reddit’s actions against Men Kampf took everyone completely off-guard.

“This ban was completely random for us,” he said in an interview with The Daily Signal. “We had no warnings or communication from the admins before it occurred.”

Another moderator, Kuato2012, said that while they never heard directly from the site administrators before the banning, the message that displays when they try to access the forum says it was removed for “promoting hate.”

“That’s an ironic pretense, considering that it was obviously an ‘anti’-hate [forum], whose purpose was to point out sexist and racist speech,” Kuato2012 told The Daily Signal.

He added that Reddit had previously taken action against other forums that exposed those on the radical left for their hatred.

“Several months ago, I also used to [moderate a forum called] r/misandry, which was intended to expose contemporary sexism against men in a more thoughtful, non-satirical manner,” Kuato2012 said, “I say ‘intended,’ because the admins banned that one after about a week. They didn’t contact us with any warning or explanation that time, either.”

A message between a moderator and a site administrator leaked onto the forum Left Wing Male Advocates vindicates Kuato2012’s concerns. The administrator admits that the site doesn’t view attacks against white people or all men as a problem and won’t take action against users or forums that target them.

In other words, on one of the largest social platforms on the internet, abuse directed at white people and all men is acceptable. And Reddit doesn’t want you to talk about it.

The story of Men Kampf is reminiscent of the attempt by The Washington Post’s Taylor Lorenz to smear and dox Libs of TikTok, a Twitter account that shares unedited videos and documents from the radical left to reveal how crazy they are. Lorenz also felt that she had to wield her influence as a journalist to destroy someone for daring to expose radical leftists grooming children online.

As more means to expose the left emerge, the left will do its best to censor them and shut them down. Often, the reasons given will be flimsy excuses of “fighting hate” or “protecting vulnerable communities.”

It’s a tactic designed purely to protect a movement whose views are out of step with the majority of Americans. Most people view racism—regardless of who’s the target—as unacceptable. They also prefer that children remain pure and unexposed to sexual ideology until they’re older.

In short, they oppose much of what the radical left stands for.

That’s why forums like Men Kampf are so important. While it’s positive that the forum was eventually restored, it’s a problem it was ever banned in the first place.

The radical left must be exposed for what it truly is. The flashlight must be shone on the monster under the bed.

They’ll try to censor us—not unlike the Nazis, whose rhetoric they echo. But that didn’t work too well for Hitler in the end, did it?