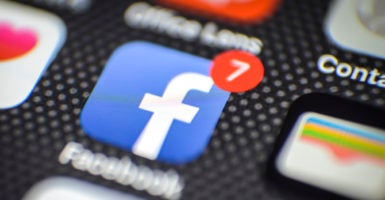 A post containing texts from the Declaration of Independence was censored by Facebook. (Photo: Jaap Arriens/Sipa USA/Newscom)

Facebook recently removed a post that featured the text from the Declaration of Independence, either showing that its algorithms are flawed, or its human content moderators find America’s founding document to be too politically incorrect for users.

A small Texas newspaper called The Liberty County Vindicator was posting excerpts of the document in the days before the Fourth of July to celebrate the patriotic holiday. But it noticed that one of its posts was removed after receiving a notice from the social media company.

“While The Vindicator cannot be certain exactly what triggered Facebook’s filtering program, the editor suspects it was most likely the phrase ‘Indian Savages,’” Stinnett wrote on his paper’s site. “Perhaps had Thomas Jefferson written it as ‘Native Americans at a challenging stage of cultural development’ that would have been better. Unfortunately, Jefferson, like most British colonists of his day, did not hold an entirely friendly view of Native Americans.”

“Although, to be honest, there is a good deal in that passage that could be thought hateful,” the understanding Stinnett continued, who said that Facebook has since apologized for what the tech giant calls a “mistake.”

The Vindicator not only forgives Facebook, but thanks it for fixing the inappropriate act of censorship.

“We never doubted Facebook would fix it, but neither did we doubt the usefulness of our fussing about it a little,” Stinnett added.

Nevertheless, despite the sympathetic viewpoints of Stinnett, the incident marks yet another instance in which Facebook is censoring content it probably shouldn’t.

As previously noted, whether the machine learning processes are to blame, or if human reviewers are going too far, is not always known because Facebook often keep the details behind its proprietary algorithms hush.

Stinnett is sure it was “an automated action” because “if any human being working at Facebook were to review it, no doubt the post would be allowed.”

Not all are considered a “mistake,” however. Facebook purposefully removed a small town business’s digital ads for American flags because it also sells guns.

“This is frustrating, but your editor is a historian, and to enjoy the study of history a person must love irony,” Stinnett concluded. “It is a very great irony that the words of Thomas Jefferson should now be censored in America.”

Facebook did not respond to The Daily Caller News Foundation’s request for comment in time of publication.