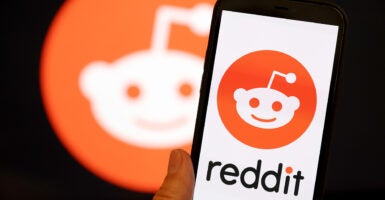 Popular social media platform Reddit plays host to r/antiwork, a forum where people discuss how to abolish jobs as they are "structured under capitalism and the state." (Photo: Justin Sullivan/ Getty Images)

Something called “r/antiwork” is one of the most active forums on the popular social media site Reddit. It promotes itself as “a subreddit for those who want to end work,” yet tries to argue it isn’t against jobs or labor.

According to subredditstats.com, a site that tracks a variety of Reddit metrics, the “subreddit” (the word Reddit uses for a community based on a specific topic) boasts more than 32,000 new comments per day and almost 1,700 new posts per day, putting it in the top 10 most active places on the site.

“Saying we are anti-job is not quite right, because a job is just an activity one is paid for, and we are not all against money,” reads the FAQ section. “‘Anti-labor’ makes us sound like we’re against any effort at all, and we already get that enough as is. (We’re not, by the way.)”

But while the forum seeks to veil itself with semantic word games, its Marxist leanings quickly become apparent. Further down, the FAQ section suggests that the subreddit isn’t against work per se, just against work under capitalism.

This is classic Marxism, aiming the people’s enmity toward capitalism and promising a better world should the economic philosophy disappear. As Karl Marx wrote in “Das Kapital,” “Capital is dead labor, that, vampire-like, only lives by sucking living labor, and lives the more, the more labor it sucks.”

In recent years, the idea of work has come under fire. Andrew Yang, then a Democratic presidential hopeful, called for enactment of a universal basic income, arguing that the government should ensure that all American citizens can have their needs met by default.

Those arguments ignore a fundamental truth about both the nature of work and work itself.

Work is essential to the human experience. We aren’t meant to lounge and to be layabouts. In the pre-modern era, we were required by our nature as mortal beings to till the earth for sustenance and to build shelter to defend ourselves from the elements. And while modernity has made it unnecessary for each individual to farm or build for themselves, work for money to buy these resources is still necessary.

Additionally, work demonstrates value to society. Marxists and communists are always eager to tell you what job they would have in the socialist utopia pending a revolution. They say they’d like to be bakers, poets, sculptors, or actors. But society has no need for thousands of additional creme brulees or productions of “Macbeth.” What society needs in spades are people to do the dirty work.

Society runs on things like functioning sewer systems, farms, and roads. Keeping them functioning isn’t glamorous, but it is necessary.

One need only look at the failed “CHAZ/CHOP” commune in Seattle in 2020 to recognize that when everyone sort of just does what they want, things quickly collapse.

In an interview with The Daily Signal, Robert Rector, a senior research fellow in domestic policy studies with the Institute for Family, Community, and Opportunity at The Heritage Foundation, explained that a system where someone works for themselves and for those who choose not to work is unsustainable.

“Those who choose to work have a double obligation to support themselves and their families and the families of those who choose not to work,” Rector says. “Society will fall apart under that, and there’s no way of stopping it.”

There’s a term for something that refuses to work, but still expects to reap the benefits of labor: parasite.

There will always be people who will be opposed to working, preferring instead to pursue other ventures while burdening others. What makes r/antiwork such an issue is the size and reach of its ideology. As one of the most active forums on the site, the subreddit has massive reach to entice people into failed Marxist ideology.

None of this is to say that r/antiwork should be banned. Hopefully, the more light is shone on the forum, the more people can see just how vapid and bereft of logic its ideology is.

To those who are enticed by the idea of not having to engage with a job, the words of former President Donald Trump seem particularly applicable: “Sounds good, doesn’t work.”