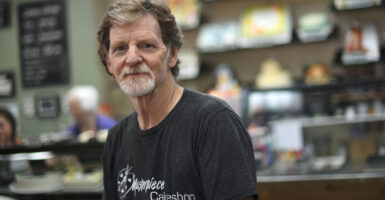 The case was about one thing, a pink and blue cake, not "compelled speech,” a Denver judge rules. Pictured: Jack Phillips, owner of Masterpiece Cakeshop, behind the counter of his bakery in Lakewood, Colorado, on Aug. 15, 2018. (Photo: Hyoung Chang/The Denver Post/Getty Images)

A Colorado baker and self-described cake artist who won a 2018 victory at the Supreme Court faced a related setback this week when a state court ruled in another case that the law requires him to make a cake to celebrate a gender transition.

“The anti-discrimination laws are intended to ensure that members of our society who have historically been treated unfairly, who have been deprived of even the every-day right to access businesses to buy products, are no longer treated as ‘others,’” Jones wrote Tuesday in a 28-page opinion.

“This case is about one such product—a pink and blue birthday cake—and not compelled speech,” Jones wrote.

Phillips’ lawyers argued that Colorado has continued to try to punish him, this time for declining to send a message supporting gender transitions by baking a pink and blue cake for a party celebrating such a transition.

In the 2018 case, the Supreme Court ruled 7-2 that the Colorado Civil Rights Commission was hostile toward Phillips’ Christian faith in trying to force him to create a cake celebrating the marriage of two men. However, the high court crafted its decision in a way that did not set a broad precedent for freedom of speech and religion.

Phillips will appeal the district judge’s ruling, said Kristen Waggoner, general counsel for Alliance Defending Freedom, a public interest legal group specializing in religious liberty, which has represented Phillips from the beginning of his legal troubles.

“Jack Phillips serves all people, but shouldn’t be forced to create custom cakes with messages that violate his conscience,” Waggoner said in a written statement.

“In this case, an activist attorney demanded that Jack create custom cakes in order to ‘test’ Jack and ‘correct the errors’ of his thinking, and the activist even threatened to sue Jack again if the case is dismissed for any reason,” Waggoner said, adding:

Radical activists and government officials are targeting artists like Jack because they won’t promote messages on marriage and sexuality that violate their core convictions. This case and others—including the case of floral artist Barronelle Stutzman, whose petition is pending before the U.S. Supreme Court—represents a disturbing trend: the weaponization of our justice system to ruin those with whom the activists disagree.

The harassment of people like Jack and Barronelle has been occurring for nearly a decade and must stop. We will appeal this decision and continue to defend the freedom of all Americans to peacefully live and work according to their deeply held beliefs without fear of punishment.