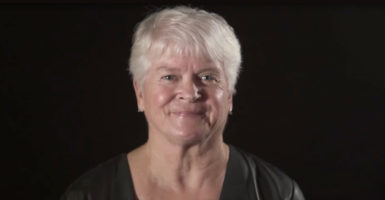 The U.S. Supreme Court on Monday sent the case of a florist who declined to provide flower arrangements for a same-sex wedding back to the highest court in Washington state.

The Supreme Court asked the Washington Supreme Court to reconsider the case of Barronelle Stutzman, owner of a flower shop in Richland, Washington state, in light of its June 4 ruling in favor of Jack Phillips, a Christian baker in Colorado who declined to create a custom cake to celebrate a gay marriage.

“Today’s decision suggests that [the Phillips case] may provide more robust protections than many commentators initially thought,” Ryan T. Anderson, a senior research fellow at The Heritage Foundation and author of “Truth Overruled: The Future of Marriage and Religious Freedom,” told The Daily Signal in an email.

Both Stutzman and Phillips are represented by Alliance Defending Freedom, a Christian legal group that specializes in religious liberty. In both cases, the organization has argued that the First Amendment prevents government from forcing Americans to use their creative talents to express messages, such as same-sex marriage, with which they disagree.

Stutzman, a 73-year-old grandmother, faces fines for violating Washington’s anti-discrimination law by declining to provide the flowers for a longtime gay customer’s wedding. Like Phillips, she is a Christian who believes, as the Bible teaches, that marriage is between one man and one woman.

The Supreme Court “reversed Colorado’s decision to punish cake artist Jack Phillips for living and working consistently with his religious beliefs about marriage, just as Stutzman has also been trying to do while under legal attack by Washington Attorney General Bob Ferguson and the American Civil Liberties Union,” Alliance Defending Freedom said in a formal statement.

Stutzman’s case goes back to March 2013, when customer Rob Ingersoll asked her to provide floral arrangements for his wedding to another man, Curt Freed.

Rather than respect her conscience and religious liberty rights, the state attorney general [Ferguson] went after her. But this disagreement about marriage isn’t discrimination, and the government shouldn’t punish people simply for acting on their belief that marriage unites husband and wife.