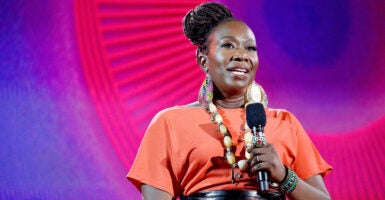 MSNBC host Joy Reid is the only minority host on her network from noon to midnight, so it’s only natural she would be most expected to lecture on the evils of whiteness, especially white maleness. It can even happen on her social media accounts.

On Nov. 16, Reid took to TikTok to compare the Kyle Rittenhouse trial to the confirmation hearings of Brett Kavanaugh three years ago.

“This Kyle Rittenhouse trial. It reminded a lot of people of something—something, can’t remember what it was,” she said. “Oh. The Brett Kavanaugh hearings, in which Brett Kavanaugh, who had been accused by a high school friend of committing sexual abuse of her, cried his way through the hearings” to make the Supreme Court.

No “independent” fact-checker will object, but Kavanaugh didn’t “cry his way through” confirmation hearings. In fact, Kavanaugh teared up during his opening statement as he described his 10-year-old daughter Liza’s reaction to Christine Blasey Ford’s allegations.

“We should pray for the woman,” Kavanaugh says his daughter responded. “That’s a lot of wisdom from a 10-year-old.” He also choked up when describing the impact of the charges on his family.

But who needs context when you’re “owning” the white male conservatives?

Reid continued, “And his tears turned out to be more powerful than the tears of Christine Blasey Ford, which were the tears of an alleged victim.”

Strongly underline “alleged.” Ford could never locate a time and place where she and Kavanaugh had ever met as teenagers.

This is where this attempted connection to Rittenhouse collapses. Kavanaugh hadn’t shot anyone during a riot. They couldn’t prove that he had done anything like raping girls as a teenage boy, despite multiple accusers with exotic stories.

Rittenhouse scrunched up his face and lost his composure when describing how he shot and killed two men. And if he hadn’t cried? Then he’d be trashed by Reid as a sociopath.

Reid’s rant continued, “But in America, there’s a thing about both white vigilantism and white tears, particularly male white tears. Really, white tears in general because that’s what Karens are, right? They Karen-out, and as soon as they get caught, they bring waterworks. White men can get away with that, too, and it has the same effect.”

No one’s going to find Joy Reid mocking a “Karen-out” when Hillary Clinton teared up on the campaign trail in 2008, or when she teared up in a Benghazi hearing in 2013. The networks touted that as a masterful performance.

“The indignation. And then, the tears in her eyes,” ABC anchor Diane Sawyer announced before trumpeting, “It was a valedictory that showed her indignation and emotion as she ends this tenure on the public stage.” It was a “riveting encounter.”

For her part, Reid is best remembered for exclaiming how Clinton was just about the most qualified contender ever in 2016. She said, “My God, since the Founding Fathers, has anyone tried to run for president with more on their resume?”

This is how Reid concluded on the white male tears, by saying, “Even as the right tries to politicize the idea that masculinity is being robbed from American men by multiculturalism and wokeism, they still want to be able to have their tears.”

The common thread is the left’s cynical accusation that these incidents of white male crying or choking up on television were insincerely staged for personal gain or political effect. What Reid was cynically offering was an early basket of sour grapes that the left failed to destroy either Kavanaugh or Rittenhouse.