Ozzy Osbourne Is Checking Out of Hotel California. Why? High Taxes. 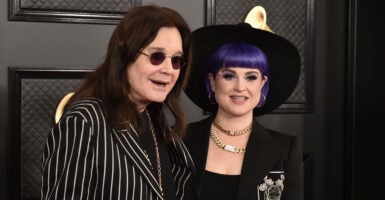 Hard rocker Ozzy Osbourne—seen here with daughter Kelly Osbourne attending the 62nd annual Grammy Awards on Jan. 26, 2020, in Los Angeles—has had it with California's confiscatory level of taxation and plans to move back to the United Kingdom. (Photo: David Crotty/Patrick McMullan/Getty Images)

“Heirs of a cold war,

Those song lyrics from a different time (1980) in Ozzy Osbourne’s classic hard rock anthem “Crazy Train” might describe the world the singer-songwriter inhabited at that time decades ago, but these days the “Diary of a Madman” rock star has something else troubling his mind—the exorbitantly high taxes of the state of California.

It has gotten to the point where Osbourne and his family have decided to pack up and move back to the United Kingdom, taking their wildly successful business enterprises with them.

We are leaving L.A. We are a bit sad. But the tax is getting too much. I am sad because I really, really like staying and living there. If they do the taxes better, then I may come back. I do not know.

I am taking my recording studio with me. I am going to build a barn there and make my own studio at [Welders House, in Buckinghamshire, England]. I will still be making music, and my band will come over.

Tax burden is one of the 12 subcategories of economic freedom in the Index of Economic Freedom. The tax burden score registers at 65.4 (out of 100) in the U.K. this year, and a much higher, and less burdensome, score of 75.9 in the U.S.

But Osbourne didn’t say the U.S. tax system is his problem; rather, taxes specific to the state of California are the real culprit driving him out.

The Osbourne family is heading east to live across the pond due to high taxes, even though they “really, really like” living in California.

So, what are these California taxes that have made Osbourne and his family decide to leave?

The top marginal federal income tax in the U.S. is 37%, which is lower than the U.K.’s 45% rate. But California has a top state marginal income tax rate of 13.3%, the highest in the nation.

It’s financially unencumbering for the Osbournes if they return to England—where they are originally from—because 37% + 13.3% = 50.3%.

With the combined income taxes alone in the state being over 50%, you can see why people leave—especially when all the various other local taxes are added on top of that.

The Tax Foundation describes some of the other California taxes, which are exorbitant in their own right, this way:

Other major taxes in California include an increased property tax penalizing death, which took effect in 2021 as a part of Proposition 19, and a 13.3% top tax rate on capital gains.

Suffice it to say, individuals know their own lives and circumstances far better than the government or anyone else can.

No reasonable person could legitimately argue that Osbourne and his wife, Sharon, do not know what they are talking about when they say the taxes in California are much too high, compared with England. It’s also obvious from reviewing the data on California tax rates above.

The self-awareness about one’s own economic situation is a main reason why economic freedom brings so many free-market benefits to society as a whole.

Everyone is an expert about their own lives. When economic freedom is retained by individuals to make their own economic decisions, individuals make intelligent decisions. The government does not know individual people or families. Even if it did, it would not be better at making decisions for the individuals or their families than they themselves are.

Government policies are based on categories of people and businesses. When a decision is made by the government for a wide swath of individuals or businesses, it’s not likely to be the best decision for those involved, or for anyone else (besides maybe some politician trying to further his or her career by virtue signaling or paying people off).

High taxes take money from people who would intelligently use it to hire productive people or invest in the futures of their family members, which would lead to a more educated and innovative society.

High taxes put that money in the hands of government employees, who spend it less wisely or efficiently, without improving society and the community, or inspiring anyone to innovate.

Unless the government is spending tax revenue on limited and specific, but crucial, roles that are necessary to protect individual liberties, such as providing a strong national defense, enforcing immigration laws, and protecting individuals from crime and danger, excess tax dollars should be left in the hands of individuals.

As a case in point, Ozzy Osbourne can inspire a much more innovative guitar solo than government bureaucrats in the state of California ever would be able to.