California’s ‘Must Stay Gay’ Bill Would Cause Severe Harm 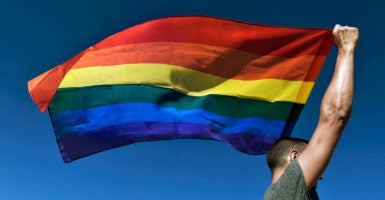 The California Senate passed AB 2943 on Aug. 16, sending the bill to the Assembly for consideration. (Photo: nito100/Getty Images)

A groundswell of opposition from churches, pastors, and ordinary citizens in California may have delayed but ultimately could not prevent the passage of AB 2943 by the California Senate on Aug. 16.

The bill itself, dubbed by some as the “Must Stay Gay” bill, is a perfect storm of leftist political correctness that attacks free speech and freedom of religion while institutionalizing the sexual revolution. The state’s Assembly and Gov. Jerry Brown have one last chance to stop it from becoming law.

On its face, AB 2943 is Round 2 of the California Legislature’s attack on sexual orientation change efforts, referred to by critics as “conversion therapy.” “Sexual orientation change efforts” is an umbrella term for talk therapies or counseling practices that assist people who experience unwanted same-sex sexual attractions in overcoming those feelings, or abstaining from homosexual behavior.

The first round of attack was a 2012 bill prohibiting licensed mental health providers from giving this therapy to clients who are minors—an approach since imitated in more than a dozen other states.

AB 2943 would significantly expand this restriction, applying it to clients of any age whatsoever. The bill, which would prohibit advertising or providing sexual orientation change efforts, would also apply to any counselor who is paid a fee for their services, regardless of whether they are state-licensed (including religious or pastoral counselors).

The bill has awakened many people to the threat that such therapy bans pose to core freedoms of speech and religion. The implications of these attacks extend well beyond the limited population of people with unwanted same-sex attractions and the compassionate therapists who seek to help them achieve their client-driven goals.

For example, a prohibition on pursuing a goal in therapy amounts to a restriction on what the therapist or counselor can say in that private setting. This is legally dubious, as shown by the Supreme Court in its recent decision in NIFLA v. Becerra, which struck down another radical California law. The state had essentially tried to force pro-life pregnancy centers to advertise for the state’s free abortion program, but the Supreme Court said such a requirement violated the centers’ free speech rights.

In his majority opinion, Justice Clarence Thomas wrote, “Some Courts of Appeals have recognized ‘profes­sional speech’ as a separate category of speech that is subject to different rules”—specifically citing the 9th U.S. Circuit Courts of Appeals ruling (Pickup v. Brown) that upheld California’s 2012 therapy ban. But Thomas went on to rebuke that view, declaring, “Speech is not unprotected merely because it is uttered by ‘professionals.’”

Thomas’ opinion sent a strong signal that the Supreme Court is prepared to strike down even limited therapy bans on free speech grounds.

The broader and more radical prohibition in AB 2943 almost certainly won’t survive. Even so, California legislators had the gall to vote for a bill that they now know is unconstitutional.

Ironically, the California Senate’s vote came in the same week that a new peer-reviewed medical journal article debunking the key claims made in support of therapy bans began circulating. Critics of sexual orientation change efforts routinely assert that such therapy is ineffective (arguing sexual orientation cannot be changed) and that attempting it is harmful (driving clients into depression or even suicide).

The problem with such reasoning is there is only anecdotal evidence of harm—including “victim stories” that are at times dubious or even clearly fabricated. Meanwhile, there are both personal testimonies and research to indicate that such therapy can be beneficial and effective.

The new study in The Linacre Quarterly, authored by Paul L. Santero, Neil E. Whitehead, and Dolores Ballesteros, observed 125 men who underwent sexual orientation change efforts. The study found that “most … had heterosexual shifts in sexual attraction, sexual identity, and behavior,” as well as “decreases in suicidality, depression, [and] substance abuse.”

These findings mirror those of a similar study by Stanton L. Jones and Mark A. Yarhouse a decade ago, which were reported to the American Psychological Association convention and exhaustively documented in a 400-page book.

AB 2943 poses a threat not only to freedom of speech, but also to freedom of religion. While some secular therapists and nonreligious clients have achieved success with sexual orientation change efforts, there is no doubt that most clients seeking such care, and most therapists and counselors providing it, have religious motivations.

AB 2943 would effectively block people from placing the teachings of their faith above the urgings and impulses of their mind or body. AB 2943 is, therefore, an attack on the religious liberty of us all.