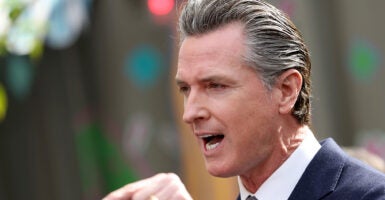 “California’s dangerous and extreme new law is the latest in an onslaught of attacks against parental rights and a demonstration of just how far some governments are willing to go to replace parents as the ultimate decision-makers of what’s best for children,” Alliance Defending Freedom senior counsel Emilie Kao said Friday in a prepared statement.

Once the law takes effect Jan. 1, California courts may take custody of kids who are seeking gender transition treatment out of state and enroll them in California’s foster care system.

California doctors will be able to offer puberty blockers, hormone therapy, and gender-reassignment surgeries to minors without their parents’ knowledge or consent.

“When state leaders think that they have a right to interfere in the business of another state, that’s a serious problem,” Family Research Council senior fellow Meg Kilgannon told The Daily Signal in a phone interview. “But now, they’re asserting a right to interfere in my family life. … They’re stating that they have a right to take custody of my child, who could potentially run away to California.”

The California measure “would’ve gone into effect without [Newsom’s] signature, but he did take the step to actually sign it into law,” Kilgannon said. The fact that the governor signed it, she noted, indicates his “complete and total support for this idea that a child could be born in the wrong body.”

The new California law prevents doctors from disclosing a child’s medical records to parents when the information is related to “gender identity” drugs and procedures, even when another state court issues a subpoena or warrant.

California doctors, via telehealth appointments, will be able to prescribe cross-sex hormones to a child in, say, Arkansas, despite a 2021 law there banning transgender treatment and procedures for minors, Kao and Richards write.

In other words, California’s new law trumps the laws of other states regarding gender-reassignment treatment. As Kao and Richards argue, this violates the U.S. Constitution’s “full faith and credit” clause, which requires a state to defer to other states’ laws and jurisdictions.

A spokesperson for Newsom’s office did not respond to a request for comment from The Daily Signal before publication of this report.

Alliance Defending Freedom scholar Matt Sharp writes that the “full faith and credit” clause “recognizes that a child’s home state is generally the state with jurisdiction” to make custody-related decisions for that child.

But California’s new law prohibits law enforcement officials in a child’s home state from extraditing that child on the basis of gender-reassignment treatment.

“In an astonishing disregard for the Constitution and the laws of other states, California will now be able to take away custody of children from their own parents—no matter what state they’re from—and deny families the right to access their child’s medical information,” Kao said Friday.

Other advocacy groups, including Family Policy Alliance and California Family Council, similarly say that the new law threatens parental rights and oversteps the authority of state and federal governments.

Family Policy Alliance President Craig DeRoche said Friday in a prepared statement: “Newsom’s arrogance is no longer just a threat to California. It’s a threat to every governor’s authority, every state’s boundaries, every parent’s rights and responsibilities, and—worst of all—to every child.”

Newsom “awarded himself custody of every child struggling with gender dysphoria, elected himself governor of every state to thwart their own laws that might protect children from harmful and sterilizing gender ‘transitions,’ and dared the entire nation to do anything about it,” DeRoche said.

In a written statement, California Family Council President Jonathan Keller said: “By signing this extreme bill, Gavin Newsom is telling all parents across the country that he knows what’s best for their children.”

Have an opinion about this article? To sound off, please email letters@DailySignal.com and we’ll consider publishing your edited remarks in our regular “We Hear You” feature. Remember to include the url or headline of the article plus your name and town and/or state.??