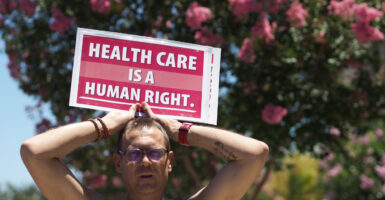 The California bill, AB 1400, would have abolished virtually all private and employer-sponsored health insurance, and would have replaced it with a state-run system promising universal coverage, including for illegal immigrants.

Among other things, the measure would have the state set and control payments for doctors and all other medical professionals and would have even restricted the ability of residents to get treatment from a doctor outside of the government program.

The bill failed in the heavily Democratic-controlled California State Assembly because Assemblyman Ash Kalra of San Jose could not even muster enough Democratic support to get a floor vote on the measure. He refused to bring the bill up for a vote, let alone even a floor fight.

Aside from opposition from “moderate” Democrats and the business community, Gov. Gavin Newsom, an outspoken supporter of the “single payer” concept, was conspicuous for his silence on the measure, further angering the bill’s supporters, notably the California Nurses Association.

This is another failed attempt to reboot an old movie. Since 1997, California’s progressive politicians and their allied lefty activists have frequently tried and failed to enact a government-run “single payer” health insurance program. In 2017, the California Legislature attempted to enact it, and the effort fell apart when it became clear that the price tag would have cost at least $331 billion.

The reason for this latest collapse is no surprise: the sheer size of the taxes required to sustain such a massive government program.

In a separate but related measure, the state Legislature would have to enact, and the voters would have to approve, a whole set of new taxes on businesses and individuals. California’s legislative analysts’ estimate the proposed program’s yearly cost would range between $314 and $391 billion. In other words, the creation of such a program would have doubled the already high tax burden on California citizens.

The latest collapse of the California “single payer” scheme is a replay of what has happened in other states in recent years.

In 2016, Colorado progressives proposed a comprehensive “single payer” government health insurance program. It would have cost $25 billion at the time, also doubling the state budget. It would have been financed by a 10 % payroll tax. Nonetheless, independent analysts then estimated it would have racked up a $253 million deficit in the first year of implementation, even with bold assumption of federal Medicaid funding to offset the total cost. In a statewide referendum, more than 3 out of 4 Colorado voters said “no!”

In 2018, the New York state Legislature was presented with The New York Health Act, sponsored by state Rep. Richard Gottfried. As with the California measure, the bill would have promised comprehensive coverage without cost sharing—no deductibles or copayments. Health care was to be “free” at the point of service.

The purported “savings” would come from anticipated reductions in administrative costs and the imposition of government payment limits on doctors and other medical professionals, with an ultimate view toward lowering their payments.

Once again, New Yorkers would have been denied the right to enroll in alternative private coverage, and patients would have been forbidden to contract privately with physicians for treatments provided under the state government health plan.

New York’s “free” health care would have required a massive increase in taxation, including a new tax on capital gains, interest, and dividends. The major revenue would have come from a new income-based employment tax, with employees paying 20% and employers bearing an estimated 80% of the costs. (Employers, of course, would likely pass on such costs in lower wages and higher prices for goods and services.)

Curiously, details on the specific brackets and rates of the new tax plan were to be set during the program’s implementation. It was New York’s version of the notorious Pelosi Rule: Pass the bill to learn the details. The New York effort failed.

The most interesting case study in America’s “single payer” saga is that of Vermont, represented in Washington by Sen. Bernie Sanders, the independent socialist, and author of the federal legislation to create a national government-controlled health care program.

In 2011, “progressive” Gov. Peter Shumlin signed Green Mountain Care, a comprehensive single-payer system, into law. It was the first in the nation.

While the statute had about every political advantage—the staunch support of a progressive state legislature, technical support from top liberal academic experts, a friendly Obama administration in Washington, and a liberal voter base—it did not have financing provisions. It was left up to Shumlin and his team to present a funding program to the state Legislature by 2013.

The governor missed the deadline, running numerous econometric models, but unable to finalize the level and kind of taxes that would be necessary to fund the new program.

By 2014, Shumlin and his team estimated that the initial annual cost of Green Mountain Care would be $4.3 billion and would require a 151% increase in the state’s total taxes. In terms of specifics, the program’s funding would have required a 11.5% state payroll tax, plus a 9.5% income tax. The governor concluded that the risk of an “economic shock” to the state was too great, and the Vermont effort also failed.

What killed California’s latest attempt to promise “free” health care for all, like previous state experiments, is the daunting prospect of prohibitive taxation. Despite progressives’ claims to deliver higher-quality care at lower cost, middle-class taxpayers do not believe it. A Heritage Foundation analysis of similar legislation at the federal level confirms their worst suspicions.

Socialism is a luxury item best enjoyed as a metaphysical abstraction in the faculty lounge.