A New Horizon for the United States-Uzbekistan Relationship 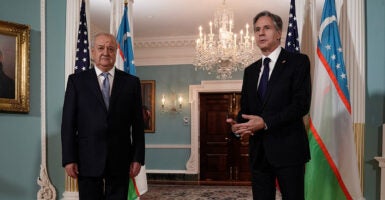 America’s partnership with Uzbekistan has become more relevant than ever. This former Soviet state is an ally against Russia, has an emerging market-based economy, and possesses significantly undervalued natural assets.

Capital Tashkent’s relationship with Washington entered what has been called “a new era of strategic partnership” during President Shavkat Mirziyoyev’s historic first visit to the White House in 2018.

More recently, during his March 9 meeting with Uzbek Foreign Minister Abdulaziz Komilov, Secretary of State Antony Blinken underscored, “We appreciate the strategic partnership between Uzbekistan and the United States, the work that’s being done through that; very much welcome the strong humanitarian support that you’ve been providing to the Afghans on one hand and now Ukrainians on the other.”

In his recent speech to Uzbeki lawmakers, Komilov said that Uzbekistan does not recognize the pro-Russia separatist-controlled districts in Ukraine’s Donbas region and called for a “peaceful solution” to end Russia’s unprovoked invasion of Ukraine.

Indeed, the U.S.-Uzbekistan relationship has gained greater strategic importance with the passage of time. The United States was among the first countries to recognize Uzbekistan’s independence from the Soviet Union in 1992 and has maintained growing bilateral relations in the 30 years since.

Uzbekistan is strategically located and the most populous country of Central Asia. Though it still has a long way to go, the country has been transitioning from a command-and-control economy to a market-based economy, propelled by a wide range of reforms, particularly since 2017.

According to The Heritage Foundation’s annual Index of Economic Freedom, the Uzbekistani economy has grown notably over the past five years. Economic freedom has also advanced during the same period. With large increases in scores for investment freedom and financial freedom, Uzbekistan has recorded a 3.4-point overall gain in economic freedom since 2017 and is in the middle ranks of the “Mostly Unfree” countries.

Also notable is that the country, which is the eighth-largest producer and the 11th-largest exporter of cotton in the world, has eradicated systemic forced labor and systemic child labor, according to new findings by the United Nations’ International Labour Organization. That progress has resulted in the end of the international boycott of Uzbek cotton.

The country is making progress in reforming its governance and public services, however, taking steps that are having an impact on the lives of ordinary citizens and making it easier for businesses to operate there.

It is also strategically better positioned than other countries of Central Asia to meet evolving new challenges: It does not share borders with Russia nor is it a member of either the Russian-led Eurasian Economic Union or the Collective Security Treaty Organization, which means it is significantly less dependent on Russia than many other former Soviet states.

But mitigating these emerging risk factors will require a new, even more dynamic economic strategy.

First and foremost, the government needs to further strengthen macro-economic stability and ensure structural reforms by supporting the private sector and reducing the role of the state in the economy. That includes boosting the privatization of state assets in all sectors.

Privatization, as well as tax and regulatory reforms, should be focused on attracting more foreign direct investments from a wide range of countries. Companies with solid investment plans, management, and technological know-how should be given priority. Uzbekistan has significantly undervalued assets, and with the proper packaging and government incentives, it should attract sizable foreign investment.

While the future success of Uzbekistan will rest in large part on the shoulders of Uzbeks themselves, America’s continuing strategic support remains essential for forwarding the reforms Uzbekistan has been charting.

Fundamentally, America’s economic engagement with Uzbekistan will be best exercised through constructive private-sector engagement that can be the catalyst for a sustainable and comprehensive economic transformation for the nation.

As this year marks the 30th anniversary of the establishment of diplomatic relations between the United States and Uzbekistan, it is in America’s interest to push forward this opportunity to enhance practical bilateral trade and investment with this vital partner in Central Asia.