I’ve Been Going to the March for Life Since I Was 12. Here’s 3 Things I’ve Learned. 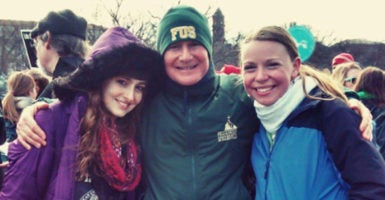 At the March for Life in 2015: Rachel del Guidice, left, and Molly Sheahan with the Rev. Nathan Malavolti, vice president of pastoral care and evangelization and associate professor of chemistry at Franciscan University of Steubenville. (Photo courtesy of Rachel del Guidice)

I have been going to the March for Life since 2006, essentially for half my life. Looking back at the past 13 years I’ve attended, I’m in awe of how it has remained the most unifying event that I have ever been part of.

I went to my first March for Life as a middle school student who was somewhat of a nerd and news junkie. Media coverage I had seen from years past had me thinking I’d join a crowd of several hundred people marching to the Supreme Court to protest abortion.

I wasn’t quite prepared for the sea of people I saw that first year, and every year since, that covers the National Mall for the rally that precedes the event. It becomes a massive human wave that slowly spills down Constitution Avenue to the Supreme Court.

Here are three recurring themes I have found to be true each year since my first March for Life at age 12.

1. The Pro-Life Movement Is Young

Anyone who says the pro-life movement is antiquated or irrelevant needs to come to the March for Life. Young people, mostly high school and college students, make up the majority of those at the event. Middle-aged adults are the minority.

When I first experienced the March for Life, I did expect the event to be like something I had never experienced before. But I was not prepared for how my first March For Life would open my eyes to the young, strong gathering of visionaries across the country that the pro-life movement is.

The beautiful thing is that after all these years, it hasn’t changed.

The march remains a gathering of hundreds of thousands of pro-life citizens from across the nation who are passionate about ending abortion, supporting moms who find themselves in crisis pregnancies, and building a society where abortion is unthinkable.

In 2017, The Washington Times highlighted a report that found that media outlets covered the Women’s March, with sponsors including the American Civil Liberties Union and Planned Parenthood, three times more than the March for Life.

It’s no wonder so many people have no clue as to the vibrancy and reach of the pro-life movement, because the media coverage does little to nothing to present a fair picture of the event.

2. A Victor, Rather Than Victim, Mentality

While society and groups such as Planned Parenthood and the Women’s March say abortion is a fundamental right for women, and that women must have access to abortion to be successful, the annual March for Life unites people who are working to build a society where no woman feels like she has to resort to an abortion because of a lack of support or resources.

Planned Parenthood and the Women’s March, to stick to those examples, resort to a “victim mentality.” Thus we have signs pictured at the 2017 Women’s March that read “Girls just want to have fundamental rights.”

Spoiler alert: We as women actually do have fundamental rights. We just think it’s diminishing women and putting them in a box. To tell society that abortion is the key to success and equality is wrong.

Women are so much stronger than that. I’ve witnessed it personally at past Marches for Life, where moms march with a child they had considered aborting.

I’ve also marched with a peer of my age whose mom, as an unmarried college student, chose life for her baby and subsequently placed her for adoption.

This peer now works for female public servants who believe in the dignity of life, and that women are strong and capable and do not have to resort to abortion to have success or opportunity.

My first March for Life experience showed me how truly welcoming and inclusive the pro-life movement is.

Each year, the event attracts people from all walks of life, nationality, religion, and political persuasion to come together around the fact that life is precious and should be protected from conception to natural death, and that women deserve more than the “choice” of abortion.

The March for Life actually achieves what groups such as the Women’s March and other “gender equality” movements claim to advocate but fail to execute. Namely, the March for Life is all about embracing each and every person who wants to participate in marching for the rights of the unborn.

By contrast, the Women’s March in 2017 excluded pro-life women.

Jessica Valenti, a Women’s March supporter and columnist at Medium, tweeted: “Horrified that the @womensmarch has partnered w/an anti-choice org. Plse reconsider—inclusivity is not about bolstering those who harm us.”

Valenti added that only certain things women do, such as abortion, can qualify as feminism.

“We need to stop the myth that feminism is simply ‘anything a woman does.’ Feminism is a movement for justice—abortion access is central,” she said.

The March for Life embraces so much more than this narrow view of “women’s rights.”

It welcomes all nationalities, ethnicities, and religions, including Jews, unlike the Women’s March, whose founders have ties to Louis Farrakhan. The Nation of Islam leader led chants of “Death to America” and “Death to Israel” in Iran.

In truth, the March for Life showed me back in 2006 not only what diversity really is, but also intersectionality–long before that word was added to the online Merriam-Webster dictionary in April 2017, defined as “the complex, cumulative manner in which the effects of different forms of discrimination combine, overlap, or intersect.”

It’s a movement of people who rise above the various adversities and stations in life. Some participants have been discriminated against or sexually abused, but they fight for the dignity and value of each and every human life.

That’s what I’ve learned about the March for Life over the past 13 years.