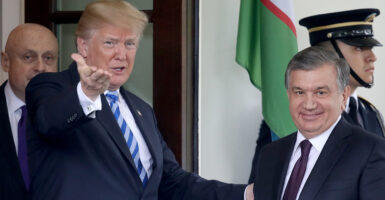 Leaders and governments in Central Asia, particularly Uzbekistan, have opened the doors for more significant interaction with Washington, signaling a serious desire for elevated bilateral engagements with the United States.

Uzbekistan’s foreign minister, Abdulaziz Kamilov, recently made an eight-day trip to the United States, which included meetings with Secretary of State Antony Blinken and Secretary of Defense Lloyd Austin.

The bilateral meetings focused on regional security in Central Asia, where many of the foreign policy challenges the U.S. faces around the world—such as China, Russia, Iran, and Islamist extremism—have increasingly converged.

It’s notable that Tashkent’s relationship with Washington has entered into “a new era of strategic partnership.”

During Uzbek President Shavkat Mirziyoyev’s historic first visit to the White House in 2018, then-President Donald Trump pledged U.S. technical assistance to Uzbekistan, as the country has sought admission to the World Trade Organization and has undertaken a reform agenda to liberalize its trade regime in line with its WTO obligations.

In his meeting with Kamilov, Blinken emphasized America’s bipartisan stance to deepen its strategic partnership with Uzbekistan, noting that the two countries are celebrating 30 years of diplomatic relations this year.

Blinken also welcomed Uzbekistan’s focus on regional connectivity, particularly in the context of closer political and economic cooperation with Afghanistan in ways that would support prosperity and growth across Central and South Asia.

Offering support for Uzbekistan’s continuing reforms, including strengthening human rights and democracy, Blinken summed up his meeting with Kamilov by tweeting that “Uzbekistan is an important partner for regional security and growth.”

Indeed, Uzbekistan has been making notable strides toward good governance, quietly transitioning from repression to openness.

The U.S. State Department has upgraded Uzbekistan’s tier status in the annual Trafficking in Persons Report in recognition of the country’s ongoing efforts toward preventing forced labor in the cotton harvest, identifying violations of laws against forced labor, and holding violators accountable.

Its overall score has increased by 1.1 points, primarily because of an improvement in judicial effectiveness. Uzbekistan is ranked 21st among 40 countries in the Asia-Pacific region, and its overall score is below the regional and world averages.

Nonetheless, Uzbekistan has been unambiguously transitioning from a command-and-control economy to a more market-based economy, propelled by a wide range of reforms. Uzbekistan is one of the most improved nations over the past three years, according to the latest index.

Indeed, Mirziyoyev and his reform-minded team have sketched out a far-reaching road map to “promote good governance, judicial reform and rule of law, economic liberalization, social development, and an open and constructive foreign policy.”

If those reform measures prove effectively institutionalized, Uzbekistan could join the ranks of the moderately free in due course.

To that end, effectively encouraging Tashkent to embrace greater economic freedom depends in no small part on America’s coherent strategy for, and committed engagement with, a Central Asian nation that matters to the U.S. more than ever.