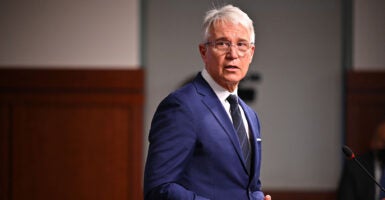 LOS ANGELES—In the eyes of some Los Angeles County leaders, District Attorney George Gascon is guilty of creating an environment for crime to go unchecked.

“We have great concern about various prosecution policies that basically aren’t being enforced,” Joe Vinatieri, mayor of the city of Whittier about 20 miles southwest of Los Angeles, told The Daily Signal.

Vinatieri says his biggest priority as mayor is to keep his citizens safe, a task that has become more challenging for communities such as Whittier that are part of Los Angeles County and subject to Gascon’s policies as DA.

Gascon, a Democrat elected in November 2020, ran on a platform of ending mass incarceration. He promised to make “neighborhoods safer, hold police accountable to the communities they serve, and reform our justice system.”

“To put it succinctly, Gascon is a rogue among rogues,” Stimson wrote for The Daily Signal in 2021. “And unfortunately, for crime victims and the citizens of Los Angeles County, he is making their communities less safe.”

“All his directives are just going to make crime and our quality of life, especially in Pico Rivera, much more difficult,” Lara, a Democrat, said.

Lara and Vinatieri spoke with The Daily Signal during a Heritage Foundation event April 7 in Los Angeles focused on rogue prosecutors such as Gascon.

On his first day in office, Gascon issued a memo listing 13 crimes that the District Attorney’s Office no longer would prosecute, including resisting arrest, prostitution, drug possession, criminal threats, trespassing, and driving without a valid license.

Gascon also announced that he would “cease filing ALL enhancements.”

“Enhancements” refers to factors such as gang activity that can lead to harsher sentencing by a judge.

“When I heard that he [Gascon] was not going to prosecute enhancements related to gang affiliation, I knew that that was going backwards,” Lara, who grew up in east Los Angeles and witnessed a lot of gang activity, said.

In Pico Rivera, population 65,000, residents want to “move away from gangs,” Lara said, adding that “we want the best for our children, just like, I think, any American city.”

Lara and Vinatieri say that Gascon’s policies aren’t serving communities like theirs.

In Whittier, a city of about 86,000 where future president Richard Nixon got his start in politics, “we are seeing an increase in petty thefts, of car break-ins, things like that,” Vinatieri said.

The increase in property crime is caused largely by those who are on illegal drugs, the mayor said, and who steal to pay for their addiction.

Under Gascon, law enforcement in Whittier often have no choice but to release those who commit nonviolent crimes back onto the streets hours after they committed the crime. Already, a California ballot initiative in 2014 known as Proposition 47 had decreased the consequences for many crimes and turned some felonies into misdemeanor offenses.

In 2021, Whittier police no longer could seek prosecutions in over 400 arrests because of Gascon’s progressive policies, a local law enforcement officer who requested anonymity told The Daily Signal.

Instead of incarcerating anyone who commits a crime, Gaston says that as Los Angeles County’s district attorney he will “??employ a holistic paradigm of public safety that requires individualized sentencing and treatment plans, which may or may not include appropriate incarceration, and restoratively holds people who commit crimes accountable, while acknowledging their humanity and capacity for redemption.”

Although it is true that “jail is not the solution for everything,” the local officer said, when you say you have a plan to stop prosecuting, but don’t have plans in place to help those offenders, that causes problems.

Los Angeles County doesn’t have the power to involuntarily commit someone to an institution for drug treatment, the officer said, and that is problematic when so much crime is driven by drug addiction.

When individuals don’t go to court for breaking the law, “there’s no legal mechanism to make sure that these people are getting the help that they need,” Lara said, adding that “by doing nothing, nothing is happening. No one is being helped.”

The council member said he is all for slow, gradual changes to the criminal justice system, but is “tired of politicians making communities like mine a petri dish for social experiments.”