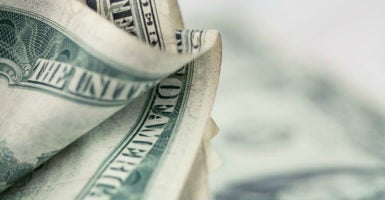 State and local governments have promised an estimated $5.6 trillion in pension benefits that they cannot afford to pay. (Photo: iStock Photos)

Pensions are a huge part of public employees’ compensation, often providing a quarter to a third of their total compensation. A new report from the American Legislative Exchange Council shows how politicians play politics with public pensions, threatening public employees and taxpayers alike.

State and local governments across the U.S. hold about $3.8 trillion in public employee pension assets. Unfortunately, the politicians and pension officials who manage these assets often sacrifice higher returns for personal and political gain.

Pension plan officials are supposed to look out for the best interests of pension beneficiaries, but the American Legislative Exchange Council report, “Keeping the Promise: Getting Politics Out of Pensions,” tells a different story:

Rather than investing to earn the best return for workers, [lawmakers and pension plan officials] use pension funds in a misguided attempt to boost their local economies, provide kickbacks to their political supporters, reward industries they like, punish those they don’t, and bully corporations into silence and behaving as they see fit.

1. Economically targeted investments. These are a way for public pension plans to buoy local projects at the cost of receiving significantly lower returns. These subpar investments strip pensions of billions of dollars in returns. Alabama is the biggest offender, with over 16 percent of its pension assets invested in them.

Shortly thereafter, Signal was forced to pay $21 million to settle what was called “one of the largest cases of labor trafficking in modern times.” Signal later entered bankruptcy and was purchased by one of Alabama’s pension funds.

2. Political kickbacks. These allow private individuals and companies to buy access to public pension investments by making political contributions to certain local politicians, and by lobbying pension funds to invest in them. Investments based on politics instead of performance costs the average pension fund over $200 million a year.

Despite having no investment experience and twice filing for personal bankruptcy, Valdes spent 25 years as a CalPERS board member where he added significantly to pension deficits by granting investment contracts to political donors and engaging in suspect behavior with other board members.

During his 13 years as the investment committee chair, CalPERS experienced one of the worst investment performances of any public pension plan in the nation.

3. Political crusades. These are a way for politicians and pension officials to use pension investments to advance political views or causes. The most common example of late is pension funds divesting from energy companies.

Since divestment is based on political agendas instead of returns, it should come as no surprise that it results in significantly lower returns. A hypothetical portfolio showed divestment from energy products resulted in a 23 percent loss over five years, compared to no divestment.

Moreover, political crusades have extended from certain sectors of the economy to personal objections.

For example, the American Federation of Teachers union has used its influence over an estimated $1 trillion in pension assets to “blacklist” about three dozen individual hedge fund managers who donated to causes and organizations that the union doesn’t like. Consequently, pension funds in at least seven states divested their pensions from these hedge fund managers to some degree.

One of the main reasons state and local pensions can get away with politically motivated pension fund management is that they lack adequate regulations and enforcement. State and local pensions are not subject to the federal Employee Retirement Income Security Act of 1974, but rather are regulated by states themselves.

The easiest way for states to eliminate the negative influence of politics in pensions is to shift to defined contribution plans. This would require governments to pay their workers’ retirement benefits immediately and would prevent politicians from having any role in workers’ personal investment decisions. Moreover, taxpayers would no longer be on the hook for unfunded promises.

Short of a complete shift to defined contribution plans, however, states need to strengthen fiduciary responsibilities to ensure pension officials are acting in the exclusive interests of participants, require greater oversight and transparency of public pension operations, and diversify pension boards.

State and local governments have already promised an estimated $5.6 trillion in pension benefits that they can’t afford to pay. Governments cannot afford to continue sacrificing valuable investment returns for the sake of short-term political and personal gains.