Shaming ‘Lockdowns for Thee, but Not for Me’ Politicians 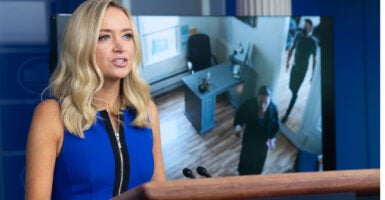 Leyna Bradley is a 21-year-old server at Tradesman’s restaurant and bar in Philadelphia, one of several major American cities that have recently prohibited indoor dining at restaurants in an effort to slow the spread of the coronavirus.

The move by the city is not without consequence. Bradley, a student working her way through college, says, “The debt’s going to pile up a little bit, and it’s definitely going to be stressful not knowing where your next source of income’s going to come from.”

The National Coronavirus Recovery Commission, a project of The Heritage Foundation, assembled America’s top thinkers to figure that out. So far, it has made more than 260 recommendations. Learn more here.

Alexandra Mattias, another food-service employee in the city, expressed similar fears: “I’m basically a single mom, and this is a steady income for me, and not just me; multiple people. For them to take that away from us is cruel, especially during the holidays.”

Given these extreme measures the city is putting in place, you would think the last thing local officials would do is visit a restaurant themselves.

Less than four months ago, Philadelphia Mayor Jim Kenney was forced to apologize for traveling to Maryland to sit down at a favorite restaurant for an indoor meal—despite prohibiting residents of his own city from that very same activity at the time.

That raises the question: If the public health situation were so dire as to require closure of indoor dining in Philadelphia, why was its mayor traveling outside city limits to do that very same thing?

Unfortunately, instances of this hypocritical behavior by our leaders have become all too common since the nationwide response to the coronavirus pandemic began in earnest this spring.

We’ve all seen the stories of governors hosting dinner parties at ritzy California restaurants amid lockdowns, or of mayors encouraging folks to stay home for the holidays and then getting caught traveling themselves.

Now, we’ve learned that even our nation’s leading public health experts are not immune from this hypocrisy. Dr. Deborah Birx, a key figure on the Trump administration’s coronavirus task force, was just revealed to have traveled to Delaware the day after Thanksgiving to spend time with more than one generation of her family, from a number of different households.

The problem? Birx had told Americans to limit their Thanksgiving holiday to members of their “immediate households.”

These stories make Americans’ blood boil, and with good reason. Officials display a reckless disregard for the mandates and requirements they themselves have put in place, while at the same time showing a callousness to the struggles and hardships of those living under them. Many of the latter lack the financial resources or political connections to sidestep the consequences of arbitrary and capricious lockdowns.

Make no mistake: Many of those restrictions have proven devastating. Heritage Foundation President Kay C. James was absolutely right when she wrote earlier this month: “Shutting down entire states only worsens the economic devastation, as well as the health and welfare of otherwise healthy people. The answer to defeating the coronavirus can’t be choosing between our health and our economy.”

As millions of Americans are suffering from lost jobs or decreased wages, it’s vital that the American people hold local, state, and federal officials accountable for these acts of hypocrisy.

Many reporters across the country have played a vital role in shining a light on them. However, more can always be done.

That’s why we’ve unveiled a new project called “COVID Hypocrisy: Policymakers Breaking Their Own Rules,” an interactive tracking tool that documents reported cases of public officials violating the very rules they force the rest of us to abide by.

America is a nation of laws. We are a nation governed by the rule of law and a respect for the rights of the individual. That respect for the rule of law extends not only to major questions of constitutional rights—free speech, free exercise of religion, freedom from unlawful search and seizure, and the rest—but also to the mundane things, those aspects of our everyday lives that we often take for granted; for example, the right to earn a living, to run a business, or to worship with fellow members of our shared faiths.

When politicians and other government officials arbitrarily limit our ability to live our lives and support our families, it’s bad enough. When they then flaunt those limitations to benefit themselves or for their own convenience, it’s orders of magnitude worse.

It shows that the rule of law, that equal treatment under the law, is not important to them. That should frighten us all.

When our leaders believe—and act as though—they are above the law, our system cannot function, and trust in our institutions cannot survive. Such behavior from our leaders is unacceptable and unbecoming of anyone who takes the oath of office.

Those who pledge to protect and uphold the laws or mandates of their country, their state, or their city should be held to account when they so brazenly disregard that promise.

No matter their party or ideology, leaders must be forced to answer for their actions when they violate the public trust. Fortunately, we the people have the ability to make that accountability a reality with our voices—and with our votes.