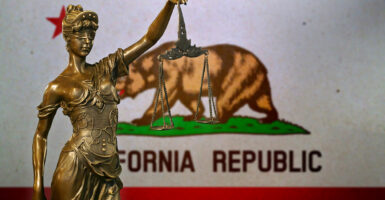 LOS ANGELES—Ana Estevez should have celebrated her son Piqui’s 10th birthday Feb. 19. Instead, she grieved over the five years she has awakened each day unable to say good morning to her little boy.

“He was just the joy of my life,” Estevez, a resident of Long Beach, California, says of Piqui. “He was everything to me. He was my only child.”

Piqui’s father suffocated him in the back seat of a car at the end of April 2017, following a trip to Disneyland.

“It was his way of seeking revenge after me telling him that I wanted a divorce,” Estevez, 50, says through tears.

Today, Estevez’s ex-husband, Aramazd Andressian, was convicted of first-degree murder and sits behind bars with a sentence of 25 years to life in prison.

Estevez saw justice for her son, but says she isn’t sure the same justice would have been carried out had Los Angeles County District Attorney George Gascon been in power when her ex-husband was prosecuted.

On his first day in office on Dec. 20, 2020, Gascon announced major changes to prosecution of crimes in Los Angeles, calling the criminal justice system “fundamentally broken.”

Sentences for violent crimes often include what are called enhancements, which can increase the length of a judge’s sentence. Factors such as gang activity, previous offenses, and details of the weapon used are examples of enhancements that can lead to more severe sentencing.

But Gascon, also on his first day in office, announced that he was ending enhancements.

“There is nothing progressive about the rogue prosecutor movement,” Stimson and Smith write, adding that the policies of these prosecutors do harm to the communities they represent:

Elected rogue district attorneys have not worked within the law to enhance public safety, protect victims’ rights, lower crime, and serve their community. They usurp the constitutional role of the legislative branch by refusing to prosecute entire categories of crime, abuse the role of the county prosecutor, fail to protect victims of crime, and ignore rising crime rates caused by their radical policies.

Gascon has “his own political ideology,” Jon Hatami, a Los Angeles County deputy district attorney who prosecutes child abuse cases and spoke at the Heritage event, tells The Daily Signal.

Gascon’s “main goal,” the prosecutor says, “is to release as many criminals as he can, as fast as he can.”

Why? Hatami argues that Gascon doesn’t “believe in our society.”

“I think George Soros finds individuals who will take money and do what he wants them to do,” Hatami says, adding that he thinks Soros’ goal is to “blow up the system.”

Since Gascon’s election, violent crime in Los Angeles is up by over 11%, according to the Los Angeles Police Department.

Hatami, who tries cases similar to that of Estevez’s son, says Gascon’s policies are influencing cases “where children were tortured and murdered.”

But Hatami says he refuses to dismiss factors such as special circumstances and prior strikes in his cases, because “my job is to do the right thing.”

Hatami isn’t alone in his commitment to stand against Gascon’s policies.

Mothers of murdered children such as Estevez and Emma Rivas, a second mom at the Heritage event, are sharing their stories and calling for justice.

Rivas, 52, the mother of three sons, is still waiting for that justice in the case of her eldest son, Christopher.

Christopher was fatally shot while standing in the front yard of his mother’s home on Sept. 25, 2016.

A gang member was visiting a residence opposite Rivas’ home in Torrance, California, 20 miles south of Los Angeles. The gang member crossed the street and began shooting at two of her sons.

Christopher, 25, was struck by gunfire and killed. His brother witnessed the crime, Rivas says.

When Gascon was elected and announced he was doing away with enhancements, Rivas says, she was devastated. She knew that her son’s murderer would receive a less severe punishment without sentencing enhancements such as gang membership.

Later, Rivas received the news that the murderer’s gang involvement would be taken into account in sentencing after the LA County prosecutors’ union sued Gascon for eliminating enhancements and other policies, which the union said violated the law.

Over seven years after Christopher’s murder, the case still hasn’t gone to trial because the courts are so backlogged. Rivas says she hopes her son’s killer still will be convicted and receive a severe sentence with Gascon as district attorney.

Justice, Rivas says, is for the man who killed her son to be locked away and “never be free.”

“That’s justice, but we don’t live in that world,” Rivas says, adding: “We live in a world where we have more empathy for criminals nowadays.”

“He has made no effort to talk to any parent of a murdered child,” Rivas says of Gascon, noting that although the DA hasn’t reached out to her, “he talks to criminals; he loves criminals.”

The Daily Signal emailed Gascon’s office for comment, but did not receive a response by publication time.

By telling her story, Rivas says, she hopes to be a voice for other victims and for parents who find it too painful to tell their stories.

It’s important to her to speak out, she says, because unless something changes, “a lot of people are not going to get justice with Gascon in office, and that’s really sad.”