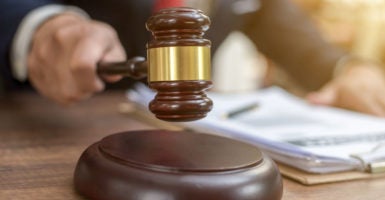 There is a troubling trend across the country with other so-called “progressive” prosecutors flat-out declining to enforce the laws as written.(Photo: Getty Images)

Few stories in the criminal justice system today can still shock the conscience and elicit moral outrage. But Mark Lawlor’s case is one of them.

In September 2008, after a daylong bender of smoking crack and drinking beer, Lawlor entered the Falls Church, Virginia, apartment of 29-year-old Genevieve “Gini” Orange, struck her 47 times with either a claw hammer or a frying pan, fractured her skull multiple times, and raped her as she lay dying on the floor of her apartment.  She choked on her own blood.

At trial, his defense attorney admitted Lawlor killed Orange. He did not contest the facts; he merely asked that his client be sentenced to life without parole.

The only issue facing the jury was whether Lawlor, now 53, should face the ultimate punishment—the death penalty—for his crimes. After carefully weighing the evidence, 12 of his peers said that he should.

But that all changed earlier this month when a newly elected prosecutor declined to seek the death penalty after a federal appeals court sent the case back for resentencing.

To be clear, that wasn’t a case-specific determination made by Steve Descano, the Fairfax County commonwealth’s attorney. That was the fulfillment of a George Soros-funded campaign promise.

While running for office, Descano campaigned on a platform of ending many tough-on-crime policies, including eliminating the death penalty, ending cash bail, and ending his office’s cooperation with federal immigration authorities.

This is part of a troubling trend across the country with other so-called “progressive” prosecutors flat-out declining to enforce the laws as written.

Yes, prosecutors must exercise discretion, but there is a big difference between exercising discretion and abandoning the duty to prosecute classes of cases, or types of defendants, to satisfy a political goal.

That sort of rogue behavior by elected prosecutors is not confined to Northern Virginia. Some 3,000 miles away in San Francisco, the elected district attorney, Chesa Boudin, is also a radical.

A former translator for the now-deceased Venezuelan socialist dictator Hugo Chavez, Boudin is the son of Weather Underground members who participated in a Brink’s armored-car robbery in 1981 that left two police officers and the armored-car driver dead.

Boudin pledged to establish an immigration unit in his office—not to prosecute illegal immigrants or any crimes committed by them—but rather to “investigate and prosecute crimes ICE agents [federal law enforcement agents] commit against members of the community … .”

He also pledged to prosecute agents who “violate our Sanctuary City Ordinance or our State Sanctuary laws and hold our community members for ICE agents … .”

We’re sure the family of Kate Steinle, who was killed by an illegal alien in San Francisco in July 2015, is appalled at this focus on prosecuting so-called “crimes” by federal agents, instead of real crimes committed by those whom the federal agents would apprehend, prosecute, and eventually deport.

San Francisco, after all, has a long history of violent crimes being committed by illegal aliens.

But back to Descano. His position that “[t]he death penalty does not deter crime and is no more effective than life sentences at keeping the most dangerous individuals out of our communities” misses the point that, traditionally, the ultimate punishment has served the three valid and important penological interests of general deterrence, specific deterrence, and yes, retribution.

More importantly, the people of the commonwealth of Virginia have spoken through their elected representatives in the legislature and allowed for the imposition of the ultimate punishment in appropriate cases.

A prosecutor’s discretion to seek or to decline to seek the ultimate punishment in specific cases is categorically different than Descano’s position that he will decline to seek the death penalty in all cases, even in ones like Lawlor’s, where it’s richly deserved.

That’s a usurpation of the will of the people and of the legislature’s authority.

“The sheer brutality and horror inflicted on this innocent woman places this crime and this defendant among the worst of the worst,” he said, adding that he would have again sought the death penalty.

Descano, however, said that declining to seek the death penalty for Lawlor’s heinous crimes “is a notable outcome because it exemplifies that our criminal justice system can seek justice, find resolution, and keep our community safe while adhering to our community’s values.”

Huh?  What values?  And where’s the justice for Orange?  Her family certainly didn’t agree with Descano’s decision and urged him to again seek the death penalty for Lawlor.

Descano ignored them, and in doing so, slapped them, and all the loved ones of others who have been savagely murdered in that community, in the face in the process.

He is right about one thing, though:  His decision not to seek the death penalty for this criminal is notable.  And the people Fairfax County should remember it.

Not only did Lawlor murder Orange, he had previously been convicted of killing a friend while driving drunk and of forcibly and violently abducting his ex-fiancée—a crime for which he had only recently been released when he murdered Orange.

At the close of Lawlor’s original trial, Orange’s mother, who sat through all eight weeks of brutal and graphic testimony, said, “When I pray, I pray for God’s justice.  And what that is, I do not know.  But God knows.”

While God’s justice may be unknowable, surely man’s justice was not served by Descano’s decision in this case.

As former prosecutors, we are appalled at this growing trend of rogue prosecutors who claim to be “progressive” (whatever that means) because they are trying to solve crimes in a new way—by essentially declining to enforce existing laws.

They are the true progressives, if “progressive” is defined as innovative or reform-minded.  Declining to enforce the laws they were elected to uphold and declining to seek justice for victims and their families is not progress. It’s dangerous.