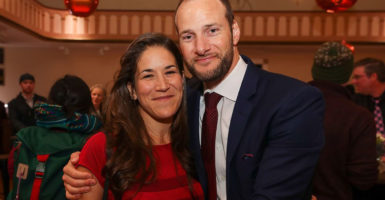 Chesa Boudin spent his childhood influenced by members of a radical left and violent domestic terrorist organization. During college, he worked as an English translator for Venezuelan dictator Hugo Chavez.

Today, Boudin is the top prosecutor in one of America’s largest cities, gaining laudatory endorsements from a U.S. Supreme Court justice and a U.S. senator, vowing to revolutionize the office to stop what he considers “mass incarceration,” and prosecuting federal immigration agents.

Within days of being sworn in Jan. 8 as San Francisco’s district attorney, Boudin cleaned house—targeting those in the criminal division in charge of the homicide unit, the general felonies unit, and gang units.

Boudin, 39, the son of two Weather Underground radicals who were convicted of murder, replaced those officials with former colleagues from the San Francisco Public Defender’s Office.

In a campaign that he won by fewer than 3,000 votes, Boudin was clear that his top priorities were decreasing incarceration, eliminating cash bail, and refusing to cooperate with Immigration and Customs Enforcement agents.

“Our criminal justice system is failing all of us. It is not keeping us safe. It is contributing to a vicious cycle of crime and punishment. More than any country in the history of the world, we have the longest sentences, the largest prison populations, the most bloated law enforcement budgets, and the highest recidivism rates,” Boudin said in a speech after being sworn in.

“We consistently fail to address the needs of survivors of sexual assault; to offer restitution to victims of property crime; to include non-English speakers; to heal the trauma caused by violent crime,” he said. “These failures have led us, as a community, as a nation, to accept the unacceptable.”

During the campaign, Boudin wrote that if elected, he would establish an immigration unit in the San Francisco DA’s office.

He said the unit would “investigate and prosecute crimes ICE agents commit against members of the community, which include illegal arrests, racial profiling, child endangerment, kidnapping, and even human trafficking.”

Boudin’s campaign website said that ICE is not above the city’s sanctuary law, which he helped craft as a deputy public defender.

“That’s why the Immigration Unit will investigate these abuses, and when ICE agents break California law and endanger our communities, they will be prosecuted,” the campaign site said. “In addition, if any agents violate our Sanctuary City Ordinance or our State Sanctuary laws and hold our community members for ICE agents, they will be prosecuted.”

Boudin promised that his office would not prosecute based on “quality-of-life” issues, including crimes such as public drug use, vandalism, public defecation and urination, and public solicitation of sex.

San Francisco faces a growing crisis of homeless residents camped on sidewalks and elsewhere, often engaged in these type of offenses. Other crimes such as car break-ins and thefts also plague the city.

Boudin’s response to homelessness is a crackdown on what he has called “corporate landlords.”

As a candidate, Boudin said in an ACLU questionaire: “Crimes such as public camping, offering or soliciting sex, public urination, blocking a sidewalk, etc. should not and will not be prosecuted.”

Among his first acts was implementing a new “local option” law under which parents charged with a crime may participate in a diversion program to avoid jail time in order to be with their children. The law covers all misdemeanors and nonviolent felonies.

On the day Boudin was sworn in, Supreme Court Justice Sonia Sotomayor delivered a video message expressing her support:

Chesa, you too are an example that gives hope to so many. It is uncommon for a former public defender to become a district attorney of a major city like San Francisco. Especially a district attorney who spent his childhood visiting parents incarcerated for committing serious felonies.

Your personal strength and commitment to reforming and improving the criminal justice system is a testament to the person you are and the role model you will continue to be for so many.

“Now is the moment to fundamentally transform our racist and broken criminal justice system by ending mass incarceration, the failed war on drugs and the criminalization of poverty,” the self-professed democratic socialist said in a tweet. “Congratulations @chesaboudin on your historic victory!”

Although it was a close race, it isn’t surprising that someone on the far left would become district attorney in San Francisco, said Will Swaim, president of the California Policy Center, a conservative think tank.

“As an observer of San Francisco politics, this is to be expected given his pedigree of a who’s who of the American left, the family trajectory along with his education and resume,” Swaim told The Daily Signal.

Even as criminal justice reform to reduce recidivism has gained bipartisan support, Swaim said, Boudin’s views on incarceration are well out of the mainstream.

“I don’t judge someone because his parents were part of a terrorist group, but I would note he views himself as a victim of incarceration,” Swaim said. “These were acts by his parents.”

On Oct. 20, 1981, Boudin’s mother, Kathy Boudin, dropped off the 14-month-old with a babysitter. She then joined Boudin’s father, David Gilbert, as part of a joint operation of the Weather Underground and Black Liberation Army to rob an armored truck in Nanuet, New York.

The failed robbery ended in the deaths of two police officers and one security guard. Both parents were convicted of murder charges, although they didn’t pull the trigger in the slayings.

Boudin’s mother attended his inauguration, and he addressed both parents in his remarks:

The crime you both participated in when I was an infant cost innocent men with families their lives. It did not matter to the DA or the judge that neither of you was armed nor that you did not personally hurt anyone. Those details matter to me. What matters even more is that since that terrible day you and my father have focused your lives on love.

When both his parents were sentenced to prison, two other leaders of the Weather Underground movement, Bill Ayers and Bernardine Dohrn, took care of Boudin in Chicago.

Ayers and Dohrn were instrumental in the political rise in Chicago of Barack Obama before he became a U.S. senator. Both Ayers and Dohrn participated in bombings and other domestic terror activities, but their cases were dropped because they were tainted by illegal FBI surveillance.

Boudin went on to graduate from Yale and Oxford. During graduate school, he traveled to Venezuela, where he worked as a translator for Chavez. In 2009, he wrote an article praising the socialist dictator for doing away with term limits.

Afterward, he traveled back to the United States to work in the San Francisco Public Defender’s Office.

Boudin was quoted in The New York Times in 2002 as saying: “Now I’m not angry. I’m sad that my parents have to suffer what they have to suffer on a daily basis,” simply because they were “dedicated to fighting U.S. imperialism around the world.”

Swaim said he understands the allure of extremist ideologies firsthand.

“I was a Communist Party member in my early 20s, but I had a family to go back to,” Swaim said. “If it takes a village, Boudin’s village was rigorously Marxist. … I had to see the failures of socialism even as I tried to acquire the worldview. I doubt he has had that struggle. Also, San Francisco usually finds ways to make bad things worse.”

The San Francisco District Attorney’s Office did not respond to phone and email inquiries for this report.

Moving from a public defender’s office to become district attorney is unusual, noted John Malcolm, director of the Meese Center for Legal and Judicial Studies at The Heritage Foundation.

“Anybody whose platform is not prosecuting quality-of-life crimes is taking a very political position that is ominous,” Malcolm told The Daily Signal. “If you don’t prosecute people for having sex in public, defecating [in public], and drug use in public, then San Francisco will be a magnet for lawlessness.”