San Francisco’s New DA: Public Urination ‘Will Not Be Prosecuted’ 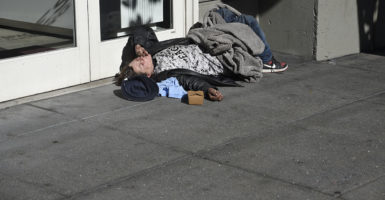 "Crimes such as public camping, offering or soliciting sex, public urination, blocking a sidewalk, etc., should not and will not be prosecuted,” Chesa Boudin said during his campaign. Pictured: A homeless man sleeps in the doorway of a building in San Francisco in September 2018. (Photo: Robert Alexander/Getty Images)

Chesa Boudin, the urine-and-feces-plagued city’s incoming district attorney, pledged during the campaign not to prosecute public urination and other quality-of-life crimes if elected. Boudin declared victory Saturday night after results showed him winning a plurality of votes in the DA race.

“We will not prosecute cases involving quality-of-life crimes. Crimes such as public camping, offering or soliciting sex, public urination, blocking a sidewalk, etc., should not and will not be prosecuted,” Boudin vowed in response to an American Civil Liberties Union questionnaire during the campaign.

“Many of these crimes are still being prosecuted, we have a long way to go to decriminalize poverty and homelessness,” he lamented.

Boudin’s campaign didn’t return The Daily Caller News Foundation’s request for confirmation that he would follow through on his pledge not to prosecute public urination.

“Now is the moment to fundamentally transform our racist and broken criminal justice system by ending mass incarceration, the failed war on drugs and the criminalization of poverty,” the Vermont senator wrote Saturday on Twitter, congratulating Boudin on his “historic victory!”