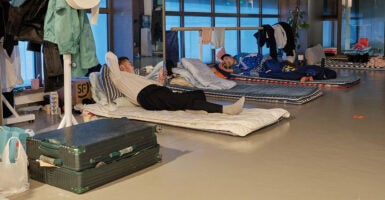 Workers browse their mobile phones on temporary beds in a compound during a COVID-19 lockdown in Shanghai on April 13, 2022. (Photo: Liu Jin/AFP/Getty Images)

“Because [Xi] is considered to be the author of the zero-COVID policy, he can’t deviate from it, even though it’s not working out,” Gordon G. Chang, author of “The Coming Collapse of China,” told the Daily Caller News Foundation on Tuesday. “If he deviates from [the zero-COVID policy], that’s an admission of a mistake, which his political opponents will use. So, China is locked into an approach which doesn’t work.”

Shanghai’s citywide lockdown and its subsequent food shortages emerge at a critical moment for Xi, who stands to be reelected for an unprecedented third term at the 20th Party Congress at an unspecified date later this year.

Xi’s signature zero-COVID-19 approach is taking flak as the 29 million inhabitants of China’s financial hub reportedly have begun to lose faith in its efficacy and that of the Chinese Communist Party, Bloomberg reported.

“I now realize we can only rely on ourselves,” a resident of Shanghai told Bloomberg.

“In Shanghai you have a number of problems,” Chang said, noting all the workers who are on lockdown. “One of them is, you just don’t have people who can distribute food.”

As a result, hungry and desperate Shanghai residents have begun to protest their confinement by shouting out their windows.

“Everyone is shouting,” a man filming a now-viral video says. “Damn.”

Residents in #Shanghai screaming from high rise apartments after 7 straight days of the city lockdown. The narrator worries that there will be major problems. (in Shanghainese dialect—he predicts people can’t hold out much longer—he implies tragedy).pic.twitter.com/jsQt6IdQNh

Some residents have resorted to looting.

On one occasion, a mob descended upon a supermarket in Shanghai and looted food and other supplies, according to a report Sunday from The Sun.

The Chinese government’s handling of the Shanghai lockdown, as well as Xi’s rigid commitment to the zero-COVID-19 policy, prompted speculation as to whether his political future is in jeopardy.

It remains unclear whether aspiring Chinese politicians might seek to use the crisis in Shanghai to delegitimize Xi. But throughout the course of his nine-year rule, the dictator reportedly has consolidated power by means of relentless purges targeting perceived political opponents.

Xi’s actions, viewed by some as seeking to secure a third presidential term, effectively have arrested the political advancement of the Chinese Communist Party’s so-called sixth-generation leadership, which roughly refers to those born in the 1960s, the BBC reported.

At the same time, Xi has targeted China’s most wealthy individuals, such as Alibaba’s Jack Ma, who went missing for three months after criticizing China’s financial system, according to the BBC.

“After [Russian President Vladimir] Putin’s victory or defeat in Ukraine and after the final results are in about the recent handling of COVID in China, only then can anyone say whether Xi Jinping is in hot water politically,” Montgomery said.

“Other than China taking a drubbing in the West reputation-wise, I dare not predict where this is all heading, both for Xi Jinping and China,” Montgomery said. “Whatever the outcome, I hope it unexpectedly leads in the direction of better relations with the U.S.”

Yet Chang told the Daily Caller News Foundation that he thought the crisis in Shanghai would, at the very least, negatively affect the Chinese Communist Party.

“I think the party is being damaged by this, and it’s not going to fail upward,” Chang said. “[Xi] knows that any admission of mistake is something that he will pay for, so he can’t do that. That’s why I believe they’re continuing on with a manifestly unworkable program.”

“The party can survive this unless enough people get out into the streets, because then people have hope,” he said. “Desperation, that’s when these types of regimes fail.”