What States Can Learn From Texas’ COVID-19 Response 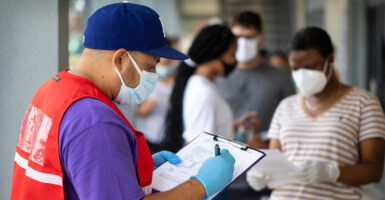 Texas officials anticipated a rise in new cases with reopening efforts, but also hoped that the health care system could effectively suppress it to a manageable level. The results of this process can help other states plan their own path to complete reopening. Pictured: A community outreach specialist collects patient information as they wait in line at a walk-up COVID-19 testing site in Dallas. (Photo: Montinique Monroe/Getty Images) 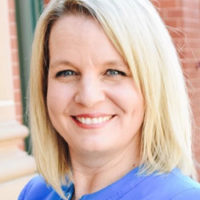 Texas has seen a surge of COVID-19 cases in recent weeks, prompting the White House’s coronavirus task force coordinator, Dr. Deborah Birx, to call the state one of “three New Yorks.” Some have even blamed the state’s early attempt to reopen as the cause of surge.

While the surge needs to be taken seriously, there are reasons to be optimistic.

For instance, in Texas, testing has increased, the rate of positive cases are trending down, and hospitalizations are plateauing. Texas’ death rate of 20 deaths per 100,000 is much lower than rates in most other states.

In a renewed effort to fully reopen the state, mask wearing and hand washing are being made a top priority, and Texans are being reminded to social distance with more frequency. If these healthy habits continue, Texas will soon be in a much better position to reopen completely.

While certain media outlets are portraying the health care system as overwhelmed by the pandemic, this is far from true.

Texas has a total of over 59,000 staffed hospital beds, with the option of surging up to 20% more. Currently, there are more than 12,200 available beds, and less than 17% of hospital beds are occupied by COVID-19 patients.

More than 80% of Texas hospitalizations are not virus-related, and 1,362 intensive care unit beds are available across the state.

Hot spot areas have received logistical support from federal and state sources. Maintaining adequate personnel and personal protective equipment will continue to be a concern throughout the pandemic, but for the most part, resources have been sufficient.

A closer look at who is getting the virus shows that Texas is similar to many other states in that the caseload is dominated by young adults. The spread in this age group has likely resulted from large social gatherings, holiday outings, and riskier social behaviors. Fortunately, this demographic has a much lower risk of developing severe illness compared to older age groups.

Texas has made some attempts to slowly reopen, and it’s likely that some elements of reopening contributed to the community spread. But solely blaming the reopening for the surge in cases is unjustified. The nation, at large, is seeing a dramatic uptick in cases.

Even in states like California, where strict lockdowns continue, the new COVID-19 case numbers have surpassed that of New York.

Other factors may also be contributing to Texas’ increase in caseloads. They include:

Right now, all eyes are on Texas as states begin to prepare their own widespread reopening plans.

Texas developed its phased-in reopening plan with the expectation that there would be a slow reemergence of the virus among the general public, but also hoped to suppress it to a manageable level of cases.

If the recent wave falls within the ability of the health care system to respond, this should be encouraging as Texas, and other states, move forward with the reopening process.

Texas officials are also aware of the need to adjust to new problems as they emerge. One such problem that states—including Texas—are facing is turnaround time for testing. Lab turnaround times have varied greatly over the last few weeks with the greater demand. Officials in Texas are aware of the problem and are actively working to reduce wait times.

Success here will be helpful to keep Texas on track with its reopening goals.

Another problem occurring in many larger counties in Texas is public health departments making decisions for millions of people within a given county, even though some of the larger counties have many different cities and towns scattered across a vast area.

With this week’s legal guidance from Attorney General Ken Paxton, the state appears to have done just this, limiting sweeping decisions by public health officials and returning control to local school districts.

In order to issue more targeted and effective responses, policymakers should look at the percentage of patients that have tested positive, the percentage of patients that need hospitalization, and the overall severity of illness for people testing positive across the state. This could better inform decision-making and projections as we move forward.

The rest of the nation should focus on what we in Texas are learning and adjust their own reopening plans accordingly. While the people of Texas, like other Americans, are resilient, the task ahead is to work our way through this global pandemic, rely on the science, and not allow fear to steal our liberty.