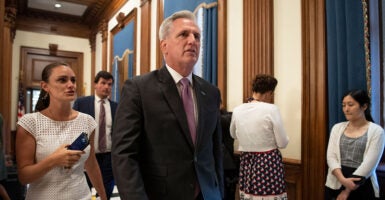 House Minority Leader Kevin McCarthy, R-Calif., seen here making his way to the House floor for a vote on June 15, said that President Joe Biden "has failed to utilize any of his broad powers to hold China accountable" for the coronavirus. (Photo: Caroline Brehman/CQ-Roll Call/Getty Images)

“The unfortunate reality is that countless friends and family members could have been saved, had it not been for the deception of the Chinese Communist Party,” McCarthy said in a letter posted Sunday on his website announcing the plan.

“A March 2020 report by the University of Southampton [in the U.K.] found if interventions in China could have been conducted one, two, or three weeks earlier, cases could have been reduced by 66 percent, 86 percent, and 95 percent, respectively,” the California Republican said.

He said June numbers show that 3.8 million people worldwide have died from COVID-19 and that the disease has claimed the lives of more than 600,000 Americans.

“President Joe Biden has failed to utilize any of his broad powers to hold China accountable and has willingly given up valuable leverage to force constructive change at the [World Health Organization],” McCarthy wrote, adding:

It is clear the American people can’t count on the administration or Democrats in Congress to take meaningful action to find the truth and demand justice.

McCarthy said his colleagues are working to hold China accountable, with actions such as House Minority Whip Steve Scalise, R-La., leading Republican members of the House Select Subcommittee on the Coronavirus Crisis to demand that House Speaker Nancy Pelosi, D-Calif., “allow a congressional probe into the virus’s origins.”

“There should be a thorough investigation on who helped create the loophole allowing the U.S. to fund ‘gain of function’ research in the People’s Republic of China,” Cheng said, adding:

The Chinese behavior regarding COVID should also be a cautionary tale for those who are constantly calling for greater U.S.-China cooperation in other fields of advanced technology, such as space.

McCarthy said the chairwoman of the House Republican Conference, Rep. Elise Stefanik, R-N.Y., and Rep. Rob Wittman, R-Va., also have introduced legislation to sanction Chinese officials who were part of covering up COVID-19 and that other colleagues in the House, including Rep. Dan Crenshaw, R-Texas, have introduced legislation to “give Americans the opportunity to seek damages from China’s deception.”

But McCarthy said more transparency and accountability is needed and laid out an eight-point plan to do so:

1. Declassification of Intelligence: House Republicans will introduce legislation to require declassification of information related to the origins of COVID-19, including in any report that comes from President Biden’s recent request.

2. Prohibit Gain-of-Function Research in and With China: We must ensure the United States no longer funds any gain-of-function research conducted in or with China, or any individual with known ties to the [Chinese Communist Party].

3. Prohibition on National Institutes of Health (NIH) Funding to Malevolent Foreign Governments: Congress should prohibit NIH funding to grantees or subgrantees from doing research with irresponsible foreign governments or entities who are intent on harming the United States, its allies, or the American people, such as China, Russia, Iran, or North Korea.

4. WHO Overhaul and Counterintelligence Investigation: WHO Director-General Tedros [Adhanom Ghebreyesus] should step down from his post at the WHO; Taiwan should be granted observer status at the WHO; and the Federal Bureau of Investigation, in partnership with the U.S. Intelligence Community, should conduct a counterintelligence investigation into the U.S. medical research establishment to determine the extent to which the governments of China, Russia, Iran, and North Korea have infiltrated critical U.S. organizations.

5. Investigations and Utilizing Existing Authorities: President Biden and Congress must continue to investigate the origins of COVID-19.

6. Visa Restrictions and Sanctions: Congress should pass a new sanctions regime imposing economic sanctions, and visa and admissibility restrictions on those in China, associated with the CCP, WHO, or other international organizations who knowingly and willfully participated in the COVID-19 cover-up.

7. Waiving Chinese Sovereign Immunity: The families of those who have died from COVID-19 should be given the option to file suit against the Chinese government for damages incurred as a result of the reckless conduct of the CCP. Several Republican members, including [Reps.] Dan Crenshaw, Ann Wagner, and Brian Fitzpatrick, have introduced legislation allowing such lawsuits to go forward.

8. Relocation of the 24th Olympic Winter Games: Given the CCP’s active cover-up of COVID-19 and contribution to the 3.8 million deaths worldwide, China should not be rewarded by allowing Beijing to host the Winter Olympics in 2022.