Rubio: What America Does About China Will Define 21st Century 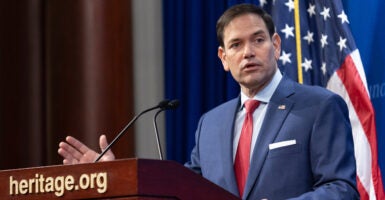 Sen. Marco Rubio, R-Fla., said the book on the history of the 21st century will be about the United States and China—and it will have one of two endings.

“It’s either going to be a story of how a rising authoritarian power replaced a free society as the world’s most powerful country and as a result, ushered in a new dark age of exploitation and conquest, utilitarianism, and all the worst aspects of human nature,” Rubio said Tuesday in an address at The Heritage Foundation.

“Or it will be the story of how the people of the United States, the freest, most prosperous and successful nation in the history of the world, rallied around the truth the country was founded on and ushered in a century of liberty and justice and prosperity,” he said.

“But this is a fork in the road that we must navigate.”

Rubio said he is concerned that American lobbyists blocked his legislation that would have prevented the importing of products made in China’s labor camps for Uyghur Muslims.

“They were more interested in appeasing the Chinese Communist Party and [Chinese President] Xi Jinping because that allows them to maximize their profit margins or interested in that than doing what is both morally right and good for the country,” Rubio said during his speech at Heritage, the parent organization of The Daily Signal.

The Florida Republican then talked about his home state, where one of the largest employers has become critical of a bill passed by the Legislature to prevent teaching LGBTQ and gender identity topics to public school students in kindergarten through third grade. Gov. Ron DeSantis, a Republican, signed the bill into law Monday.

“It was interesting last night to read Disney, which filmed ‘Mulan’ in Xinjiang, the very province where they have these genocide camps,” Rubio said, “and then in the credits of the movie, they thank the local government officials who run those camps. But apparently, they’re outraged that in Florida, our schools won’t be teaching 5-year-olds about gender identity.”

Rubio, vice chairman of the Select Committee on Intelligence and a senior member of the Foreign Relations Committee, said Americans must realize the challenge in the century ahead is not a pandemic or climate change, but China:

Rubio went on to deliver a message that he said might sound contrary to conservatism:

We have to empower government to counter Beijing’s infiltration. Those are not words you often hear spoken at The Heritage Foundation by any speaker: ‘Empower government.’ But here’s the thing, being a conservative is not being anti-government. It’s understanding that most of the answers to the problems in life don’t come from government. There are a few things the government has to do right to provide for the national security.

Part of that, he said, is reinstating a China initiative at the Justice Department that was created to counter the communist regime’s espionage campaign against American universities, industries, and research centers.

“It was just shut down by President [Joe] Biden because left-wing activists smeared it as racist and xenophobic,” Rubio said. “Of course, those are the magic words that get anything canceled or anything shut down. We’re not going to be able to address the unprecedented threat posed by the Chinese Communist Party as long as this White House and American politicians continue to prioritize the whims, the pet causes.”

Rubio also stressed that America should not be dependent on hostile regimes for needed products:

You can’t be a great power if you’re not an industrial power. You have to be able to make things. That’s why in this country we made a decision a long time ago that we are going to buy our weapons, particularly our airplanes, from American companies that make them in America. Well, the menu of things that are now critical to our national security has expanded. I would argue that being able to make semiconductors [is] just as important to our national security. I would argue that the active ingredients in our pharmaceuticals [are] in our national security and relying on a hostile adversary for these things and more will leave us vulnerable and leave us weak. …

Think about all the things that we depend on China and its manufacturing capacity to survive. Imagine being cut off from it. Imagine the leverage that would give them. Think our options are limited now, Russia? We won’t have very many in that conflict.

The United States must empower allies to stand up to China, Rubio said.

“Our alliances, our partnership with Taiwan, Japan, [South] Korea, India, and others are going to be more crucial than ever,” he said.

The senator said Russia’s invasion of Ukraine on Feb. 24 should alert world powers about the potential for China’s belligerence.

“The horrific invasion of Ukraine should make countries across Europe realize by now that they’re not living in some sort of post-conflict paradise utopia,” Rubio said. “That realization can’t be a momentary blip that evaporates once [Russian President Vladimir] Putin loses. It has to be sustained.”

For too long, he said, there was bipartisan consensus that more trade and openness would cause China to be more free—an experiment that hasn’t worked.

“The idea was that capitalism would change China and the problem is, China changed capitalism in China,” Rubio said.

Capitalism is when you have two companies or two entities operating on the same set of rules, and the better and more efficient company succeeds. That’s not what we have. China’s not capitalism. Their companies are heavily subsidized.

Rubio said what happens in China isn’t capitalism, but cheating. He presented a basketball analogy.

“That’s like allowing one team to play basketball with five people and the other team to have 10,” Rubio said. “And then people argue, ‘Ah, you’re against basketball?’ No, I’m not. I’m against 10 on five.”