5 Things You Should Know About US Trade With China 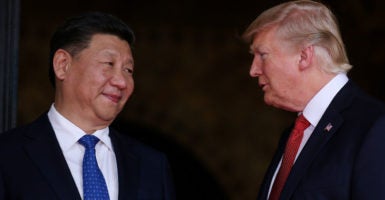 It’s true that the U.S. and China continue to have problems with access to certain areas of the Chinese market and that intellectual property theft is a problem. It’s also true that China’s state-led capitalism diverts both its own markets and international markets.

We have to find ways to address these problems, but in the process, we cannot lose focus on the bigger picture.

Here are five things you should know about trade between the U.S. and China:

1. It’s more about individuals, not governments.

The U.S. government doesn’t trade with the Chinese government. It’s American farmers, manufacturers, services industries, and so on who trade with Chinese individuals and businesses.

Yes, there are state-owned enterprises in China, and there are Chinese companies, seen as champions by the state, that receive either monetary or implicit support from the Communist Party. But the explosion of trade and investment with China over the past decade has been between private individuals, not governments or government entities.

2. China is our largest trading partner.

In 2017, the U.S. and China traded $711 billion worth of goods and services. While China is our largest trading partner, our total bilateral trade represents only about 13.5 percent of trade the U.S. has with the rest of the world.

But U.S. total world trade has been marginally decreasing. Total trade growth between 2000 and 2010 averaged about 6.6 percent. U.S. total trade so far this decade has averaged 3.3 percent.

Direct trade and investment can affect employment. For example, a 2017 working paper from the National Bureau of Economic Research highlighted that China’s export growth after joining the World Trade Organization created a short-term loss of almost 1 million American jobs between 2000 and 2007.

But to put that in some perspective, the U.S. domestic economy has added roughly 1.4 million nonfarm jobs every year for the past decade.

In the long run, because of an increase in trade with China, U.S. consumer welfare increased by 6.7 percent.

At the top of the import list from China are cellphones ($70 billion), computers ($46 billion), and telecommunications equipment ($33 billion). But other major imports include toys, games, and sporting goods ($27 billion), clothes ($24 billion), and furniture ($21 billion).

5. China is not America.

China is not as free economically as America. China’s economic freedom score ranks it 110th in the world. The U.S. ranks 18th. Nor are the Chinese as prosperous as Americans.

The U.S. economy continues to benefit because we maintain competitively low barriers to trade and investment. But the U.S. doesn’t have the lowest barriers to trade; nor are we the most economically free country. China has reduced its own barriers, but is still less free economically than the U.S.

No doubt, the U.S. has its problems with the way the Chinese manage their markets. We have to find ways to address our differences.

Certainly, we must enforce our rule of law to punish those guilty of intellectual property theft. Property rights are the foundation for any thriving economy.

Meanwhile, the U.S. must also continue to pursue economic freedom. But it should do so without souring U.S.-China economic relations in the process.