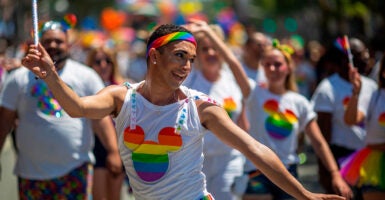 Disney is the target of both LGBT activists and pro-family groups for its flip-flopping stances on a parental rights bill in Florida. Pictured: Disney employees participate in the annual Los Angeles gay pride parade in West Hollywood, California, on June 9, 2019. (Photo: David McNew/Getty Images)

As Walt Disney Co. employees staged an all-day walkout Tuesday to protest what they say is the company’s insufficient response to a parental rights bill in Florida, the Family Policy Alliance and the Florida Family Policy Council called on the entertainment giant to stop taking sides on controversial issues and to protect families and children.

“As a company whose primary customers are parents and their children, turning against Disney’s own audience for supposed political gain makes no sense,” an open letter from the Family Policy Alliance said. “Yet, in opposing Florida’s bill that supports parents and protects children from sexualization, that is exactly what Disney has done.”

Florida has been at the center of a national debate since its Legislature passed HB 1557, the Parental Rights in Education bill, which prohibits schools from instructing young children in kindergarten through third grade on sexual orientation and gender identity.

Opponents on the left—echoed by many mainstream media outlets and others—have attempted to demonize the legislation as the “Don’t Say Gay” bill.

Although Disney CEO Bob Chapek opposed the bill and encouraged Florida Gov. Ron DeSantis to veto it, the Disney employees conducting the walkout said the company has not done enough to support LGBT workers and should be more vocal in its opposition to the legislation. Tuesday’s walkout follows a series of smaller employee protests since March 15.

In addition to apologizing for not opposing the bill more fiercely, Chapek promised to create a task force to ensure more LGBT content for children in Disney films.

The pro-family organizations urged Disney to reverse its opposition to the Florida bill and cited a national poll conducted for The Daily Wire, which found that 67% of Americans disagree with Disney’s stance.

By opposing [HB] 1557, Disney has communicated to its family consumers that Disney believes parents should not have access to vital information about their children.

Worse yet, Disney’s opposition to 1557 means the company not only tolerates, but promotes, instructing 5-year-olds about sexual partners and that these young children might be ‘born in the wrong body’ and may need to transition.

Craig DeRoche, president and CEO of the Family Policy Alliance, said in a press release that Disney should be wary of destroying its family-friendly reputation.

John Stemberger, president of the Florida Family Policy Council, said that rather than prioritizing its paying customers and theme park guests, Disney is appeasing a “screaming mob of woke employees” who are abandoning their jobs.

“Disney has long lost its neutral status as a unifying, nonpolitical element of our culture,” Stemberger said. “Instead, they have now become political leftists and enemy No. 1 to their primary base of customers—parents with small children.”