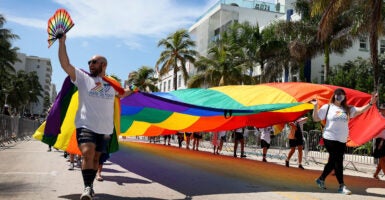 For the crime of trying to protect young children from sexually explicit material in the classroom, Florida legislators are being crucified by the media.

The Florida House recently passed the parental rights bill known as HB 1557, and it has cleared a final committee in the state Senate. Senators now have until March 11 to pass the legislation and put it on Gov. Ron DeSantis’ desk.

The media has wildly distorted the intent of the bill. Yes, I know, what’s new?

But the sheer level of message discipline by a broad swath of media outlets to promote the message of left-wing Democrats is impressive.

A quick internet search reveals an almost uniform effort in the media to call HB 1557 the “don’t say gay” bill. NPR, ABC, NBC, and The Associated Press are among many news outlets that have labeled it as such.

Not only is this label for the legislation clearly just aligning with the message that Democrat opponents want to promote, it’s also not in any way accurate about what the bill would do.

When one looks at the text, there is nothing about not saying “gay.” This points to the larger issue that Democrats who oppose the bill, and their media allies, don’t want to discuss the specifics.

Instead, they want to use the debate as an opportunity to label conservatives and Republicans as mean and hateful.

Some of the criticism has devolved into outright hysterics.

President Joe Biden jumped in with the straw man, calling the bill “hateful.” What a surprise.

Again, the implication—from the media headlines and political attacks—is that Florida lawmakers are considering an extremist, anti-gay hate bill.

So, what would the legislation do? In short, it would ban sexually explicit content for young children in public school classrooms.

A fact sheet produced by Heritage Action for America explains:

The bill would prevent school personnel from pushing planned instruction on sexual orientation or gender identity issues in kindergarten through third grade or in contexts that are not age-appropriate in later grades. The bill does not prohibit organic conversations between students and teachers, nor does it prohibit age-appropriate discussion of social issues including sexual orientation if it is in accordance with state standards.

Again, nothing about the bill requiring that Floridians not say “gay.”

Another media distortion is that HB 1557 would force schools to “out” students who are not heterosexual. This just isn’t true.

The bill actually encourages any student “to discuss issues relating to his or her well-being with his or her parent or to facilitate discussion of the issue with the parent.”

This provision is a response to what’s happened in some schools, where a student is pushed by school officials to undergo a gender transition without the permission or knowledge of parents.

There may have been a time and place where such restrictions on sexually explicit content for young children didn’t have to be addressed, but the reality is that more of such content is getting injected into children’s books and other materials.

This is pretty commonsense stuff. Even the leader of a prominent Republican LGBT group has said as much.

Charles Moran, president of Log Cabin Republicans, also said it was important to put restrictions on curriculum. A third-grade-and-younger demographic, he said, is “entirely too young of an age bracket to be having these types of very adult and very complex conversations around sexual orientation and gender, specifically gender identity issues.”

Sexual orientation and gender identity, Moran added, “is not an appropriate subject matter [to be] teaching at that time.”

Importantly, Moran said, the bill wouldn’t prevent children from having discussions about related topics, even while in class. Instead, he said, it “prevents the school from building this into curriculums and having some sort of forced conversation about it.”

Despite how some are portraying it, this isn’t a free speech issue. Teachers and school administrators can’t just say or do whatever they want in public school classrooms, yet that is the message that the left has sent over the past few years.

The following testimony is the sort of thing that the bill is meant to address. This Florida mom’s child was put through a gender transition program without her consent:

The bill’s sponsor, state Rep. Joe Harding, a Republican, said the widespread media portrayal of his legislation is a far cry from what it is.

“One, it defines that there are certain instructions related to gender and sexual orientation that are just not appropriate at certain ages and we define that as kindergarten through third grade,” Harding said, according to Fox News. “A school having curriculum that teaches gender and sexual orientation and what that means, and getting into the weeds on that, is just not age-appropriate.”

DeSantis, Florida’s governor, has spoken out in support of the bill, noting that the primary issue at stake here is that “parents must have a seat at the table when it comes to what’s going on in their schools.”

DeSantis said that it is inappropriate for teachers to be forcing discussions about sex and gender identity on young children, and that’s not what schools are for.

“Schools need to be teaching kids to read, to write,” DeSantis told reporters in early February. “They need to teach them science, history. We need more civics and understanding of the U.S. Constitution, what makes our country unique.”

But, according to the left, you’re supposed to accept what schools do with your children behind closed doors. The message has been: Don’t ask questions and don’t try to stop them.

This attitude that educators and teachers unions know best is in part what has set off a wave of parent-led rebellions around the country.

Parents—or the elected leaders who speak for them—have every right to have a hand in what is or isn’t taught in school.

This traditional role for parents certainly includes putting boundaries on what sexual and gender identity content should be considered inappropriate for young children.