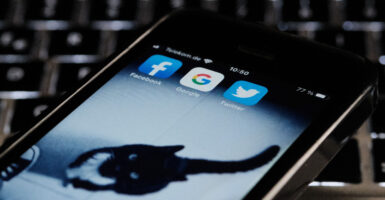 Rep. Ro Khanna, D-Calif., is chairman of the House Oversight and Reform Committee’s subcommittee on the environment, which has conducted two hearings on oil “misinformation” and postponed a third.

In February, Khanna tweeted: “Facebook is preventing us from taking action on climate change by allowing climate misinformation to spread. Congress must step up and hold them accountable.”

“Misinformation being spread on social media is undermining our efforts to tackle climate change,” Khanna said in that tweet. “As chair of the House Oversight Environment Subcommittee, I will be holding a hearing to hold social media companies accountable.”

In a subpoena of oil companies, the House Oversight and Reform Committee asked for “marketing, advertising, or social media activities tending to influence public opinion … including communications with public relations firms or social media companies.”

House Democrats seem to hint that their investigation will expand beyond the oil industry, said Christopher Horner, counsel for the nonprofit watchdog group Government Accountability and Oversight.

“The committee has already expressed outrage, followed by subpoenas, over the targeted companies funding political speech the committee doesn’t like—energy and business trade associations,” Horner told The Daily Signal. “It also has indicated it intends to pursue public affairs firms as well as social media activities. Except we already know from open records productions that the social media giants collaborate with the climate inquisitors.”

Horner’s group is involved with litigation alleging that the committee violated both the law and House rules in its conduct of the investigation.

After Google announced last fall it would “demonetize” what it calls “climate denial,” green activist groups have pushed to expand the definition of denial.

The Center for Countering Digital Hate issued a report in November listing 10 websites, lumping in conservative news sites such as The Washington Times, Breitbart, and Newsmax with Russian state-run media that it said propagate two-thirds of “digital climate change denial.”

The Center for Countering Digital Hate is a British-based organization aligned with the left wing of the Labour Party. It advocates for removing what it defines as hate groups from media and social media outlets.

Interestingly, among content cited by the report to try to buttress its point was a commentary on The Daily Wire that said the left “intimidates its opponents into silence.”

The report from the Center for Countering Digital Hate states that use of the term “climate alarmism” fits the definition of disinformation or denial:

Throughout this report, the terms ‘climate disinformation’ and ‘climate denial’ should be read as referring to content that fits the following, narrow definition … Deceptive or misleading content that undermines the existence or impacts of climate change, and the need for corresponding urgent action, typically by referring to climate science using phrases such as ‘climate alarmism’ or ‘climate fraud.’

“The tech guys shouldn’t play ball. It’s not wise to be the judge and jury about what information on this issue can be public,” Tom Pyle, president of the Institute for Energy Research, which supports oil and gas development, told The Daily Signal.

Pressure from Democrats and activist groups to block differing opinions, Pyle added, is no sign of strength.

“This sends a message that they are so worried the public is not signing onto their agenda they are using a strong-arm tactic to silence viewpoints that challenge their viewpoints,” Pyle said. “These hearings are just a political exercise to silence ideological opponents.”

After facing criticism from environmental groups, Twitter announced in June that it would create a climate change “topic” that would feature only what Twitter said would be credible information.

In 2020, Facebook partnered with the group Climate Feedback, which it said would be an “independent fact-checker.” Nick Clegg,  Facebook’s vice president for global affairs, told The Washington Post that the company planned to reduce distribution of posts that its fact-checkers say are false.

Stossel sued Facebook last year, asserting that the platform went beyond censorship of the journalist and into defamation.

Horner said the emails demonstrate that Facebook contacts what it calls its “independent fact-checker” with suggestions about what to write about.

One April 2021 message from a Facebook employee to faculty at the University of California, Los Angeles said: “Facebook reached out to Climate Feedback to alert us about a video by John Stossel that is going insanely viral right now.”

A May 2020 message from a Facebook employee tells a professor at the University of Illinois: “PragerU recently posted a video titled ‘Climate Change: What Do Scientists Say?’”