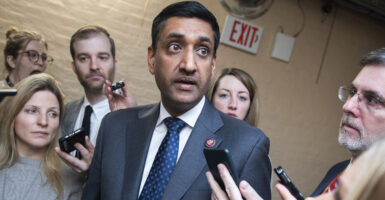 A spokesperson for Democrats on the House Oversight and Reform Committee says the panel has followed relevant laws and rules in investigating oil companies. Pictured: Rep. Ro Khanna, chairman of a subcommittee on the environment, speaks with reporters on Jan. 8, 2020. (Photo: Tom Williams/CQ-Roll Call, Inc./Getty Images)

House Democrats are using privately funded staff to investigate oil companies for spreading “disinformation” on climate change, a possible violation of federal law and the chamber’s own rules, a lawsuit alleges.

A spokesperson for Democrats on the House Oversight and Reform Committee, which is conducting the yearlong investigation, said the committee has followed all relevant laws and rules in consulting with others.

Co-Equal, the private nonprofit group named in the federal public information lawsuit, denies being part of a major hearing in the climate-related investigation of oil companies.

Co-Equal, founded by two of House Democrats’ former staffers who led the congressional tobacco hearings in the 1990s, is sponsored by Arabella Advisors, a liberal megadonor. The group also received $300,000 from an organization backed by another major donor on the left, billionaire financier George Soros.

Virginia talk radio host Rob Schilling, a former reporter who won awards from The Associated Press and the Virginia Association of Broadcasters, filed the lawsuit seeking records from the House of Representatives. Schilling is represented by a private watchdog group called Government Accountability & Oversight.

The subject of Schilling’s lawsuit is the House Oversight and Reform Committee’s investigation alleging “disinformation” from oil companies misled the public about the dangers of climate change. The suit alleges that the Democrat-run committee violated the law in its zeal to go after oil companies.

Rep. Ro Khanna, D-Calif., chairman of the panel’s environment subcommittee, told The Hill in September that the committee enlisted the aid of “a lot of people” who planned the 1990s hearings into tobacco companies chaired by then-Rep. Henry Waxman, D-Calif.

The first big public event from the probe was an Oct. 28 hearing by the full oversight panel questioning CEOs of six major oil companies. But, as Khanna said in a Reuters story published a day earlier: “This will be a yearlong investigation and the hearings mark the beginning of it.”

The committee held another hearing Tuesday at which climate activists and scientists testified about whether oil companies are acting to address global warming, as well as their alleged disinformation effort.

Congress must properly use its subpoena power, Schilling said.

“Congress has the power to issue subpoenas when it has a proper legislative purpose,” Schilling told The Daily Signal in an email. “This seems to be no more than scapegoating Congress’s failure to persuade the public about this agenda, after all this time and money. But members of Congress are getting ever more bold about confessing the true purpose here is not legitimate legislative inquiry.”

The lawsuit, filed Jan. 24 in U.S. District Court for the District of Columbia, seeks “access to certain records pertaining to the use of outside private donations, funds, or in-kind goods or services to conduct and support the activities of, or pay the expenses of, a congressional office in violation of House rules.”

The lawsuit seeks all emails and any Skype and other recordings regarding the House Oversight and Reform Committee and donor-provided consultants.

Congress exempted itself from the Freedom of Information Act, however, so the lawsuit refers to “common law” precedent for access to public records that preceded FOIA.

“During the Nixon administration, the courts repeatedly ruled that there was a common law right of access and that it was quite broad,” Schilling told The Daily Signal. “I hope that the courts haven’t forgotten the importance of the common law right since then.”

His suit goes on to state that House Rule XXIV and federal law, specifically 31 U.S. Code Section 1342, prohibit the use of outside private donations and in-kind goods or services.

The Oversight and Reform Committee has followed all rules in its investigation, the spokesperson told The Daily Signal in an email.

“Congressional offices routinely speak with outside experts,” the spokesperson wrote. “The committee has followed all applicable House rules in this critically important investigation into Big Oil’s disinformation campaign to deny climate change, and will continue to do so in the future.”

The lawsuit notes that Democrat state attorneys general withdrew subpoenas to more than 100 think tanks, scientists, and others in a 2016 climate investigation after Competitive Enterprise Institute, a libertarian think tank, challenged the subpoenas on First Amendment grounds.

Co-Equal, a private nonprofit, has been helping to supplement congressional staff since at least 2019.

Schilling’s lawsuit identifies Co-Equal’s founders as similar to Khanna’s description of who is assisting in the probe of oil companies. That’s because two staffers who worked for Waxman during the tobacco hearings—counsel Phil Barnett and staff director Phil Schiliro—founded Co-Equal.

Khanna said in September that “a lot of people” who planned the 1990s Waxman hearings into the tobacco industry were assisting Democrats in the oil company investigation.

However, Barnett said Co-Equal was not involved with the Oct. 28 hearing with oil company CEOs.

Arabella Advisors, a Washington-based consulting firm, is the fiscal sponsor of the Hopewell Fund, the Sixteen Thirty Fund, and other nonprofits that bankroll liberal organizations.

Moreover, the Open Society Policy Center, a group financed by Soros, earmarked $300,000 for the Co-Equal Action Fund in a donation to the Sixteen Thirty Fund, according to the policy center’s fourth-quarter 2018 report. The report said the donation was specifically “to support work to enhance congressional effectiveness and oversight.”

“It’s the kind of textbook Beltway insider scheme that Arabella deserves to be famous for: Funding from George Soros to shadowy nonprofits running a partisan campaign to push radical environmentalism on the country,” Hayden Ludwig, a senior investigative researcher with the conservative think tank Capital Research Center, told The Daily Signal.

Co-Equal met questions about the lawsuit from The Daily Signal by referring to a Jan. 31 letter from co-founder Barnett to Sally Dudley, an associate director at Arabella Advisors.

“The allegations in the complaint regarding Co-Equal are false. The Government Accountability and Oversight group claims that Co-Equal—and by extension Arabella—were involved in an Oct. 28, 2021, climate hearing held by the House Oversight and Reform Committee,” wrote Barnett, a former staffer for Waxman on two separate House committees, including the Oversight panel during the tobacco hearings of the 1990s.

Barnett added in the letter:

I want to make sure you know Co-Equal had no involvement in that [climate] hearing and no Co-Equal resources were used in connection with the committee’s investigation. Apart from the false allegation about Co-Equal, the theory of the complaint rests on an erroneous interpretation of House Rule 24 that conflicts with the history of the rule and how it has been interpreted by the House Ethics Committee.

The organization did not respond to a follow-up email from The Daily Signal asking whether the separate political action entity, Co-Equal Action, was involved in the hearing or the investigation.

Schilling said Co-Equal was responding to an allegation he doesn’t make in the lawsuit.

“They’re distracting from the issue and answering a claim I haven’t made,” Schilling told The Daily Signal. “Whether or not certain individuals attended a hearing is a very different issue from whether they were involved in the hearing and planning the hearing. And whether Co-Equal resources were used in connection with the investigation or any particular hearing is something that the appropriate officials ought to look into, rather than accept on faith, especially under these very unusual circumstances.”

Schilling’s lawsuit references a 2019 news report in The New York Times about Co-Equal forming to help Congress “reassert” itself by investigating the Trump administration.

Co-Equal’s website notes that the number of congressional staffers responsible for conducting oversight has declined since 1994. It says the organization can provide advice and “connect congressional offices with experts who level the information playing field.”

Schilling’s lawsuit doesn’t directly allege that Co-Equal is part of the investigation, but says only:

Plaintiff states on information and belief, including based upon Chairman Khanna’s admissions and other materials in the public domain, that among the outside parties brought in as consultants to execute this new quasi-judicial pursuit of private parties are individuals operating through and as part of an organization called Co-Equal.

The lawsuit also refers to a June 15, 2017, memo from Barnett and Schiliro on climate issues that doesn’t appear to be related to Co-Equal, the group they founded.