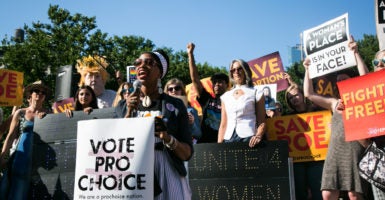 The liberal group Demand Justice makes it hard to tell who is paying the millions it plans to use in opposing the confirmation of Judge Brett Kavanaugh for the Supreme Court. Pictured: Protesters gather July 10 in Union Square in New York. (Photo: Karla Ann Cote/NurPhoto/Sipa USA/Newscom)

But some Democratic operatives have formed a new progressive political outfit that hopes to close the right’s competitive advantage. Former Hillary Clinton spokesman Brian Fallon leads the operation, called Demand Justice, with support from alumni of the Clinton presidential campaign and the Obama administration.

Demand Justice already emulates its conservative counterparts in at least one significant respect: The group’s organizational structure fully obscures the sources of its financial support, a review by The Daily Caller News Foundation has found.

Demand Justice is not an independent organization. Rather, it is fiscally sponsored by a nonprofit called the Sixteen Thirty Fund.

Identifying fiscal sponsorship is sometimes difficult, as the status is established for different reasons and takes different forms. There is no category in the tax code for fiscal sponsorship, nor do sponsored projects need to be reported to the IRS.

In the first instance, a nonprofit may provide administrative and financial assistance to a new project until it can operate independently.

In the alternative, a nonprofit may provide a legal and logistical home for a project that never would be viable on its own.

Most Sixteen Thirty trade names registered with the regulatory agency were established in early 2018, suggesting that they are some distance from full autonomy.

The Sixteen Thirty Fund is bankrolled by key supporters, one of whom is left-wing financier George Soros’ Open Society Policy Center, as previously reported. Between 2014 and 2016, fewer than five contributors accounted for 57 to 70 percent of its donations.

The Sixteen Thirty Fund is administered by a consultancy called Arabella Advisors, which provides “strategic guidance for effective philanthropy,” according to its website.

Sixteen Thirty’s most recent publicly available tax forms indicate it outsources a significant portion of management services and operational support to Arabella. In 2016, the consultancy claimed almost $800,000 in fees for work on behalf of Sixteen Thirty.

Both groups also have the same principal officer. Eric Kessler, a former White House aide to President Bill Clinton, serves as senior managing director of Arabella and as president of Sixteen Thirty. Both groups have the same Washington, D.C., address.

The approach appears typical of the company’s approach to such initiatives. Kessler told Worth magazine in 2017 that Arabella often assumes core management functions for its client charities.

“First and foremost, we support family philanthropists, family foundations, by providing staffing,” Kessler said. “What that means is, there’s a whole bunch of foundations with assets between about $30 million and $300 million whose address is my office. We are their executive director, their program officer, their grant manager.”

Arabella Advisors was among a dozen left-leaning organizations Russian hackers targeted in March 2017. The firm received ransom demands after cybercriminals mined the emails of its 150 employees for embarrassing secrets.

As a 501(c)(4) nonprofit under the tax code, Sixteen Thirty may redact the names and address of contributors when it releases its tax forms to the public. Consequently, discovering the source of donations can be difficult.

Though Sixteen Thirty must provide a general overview of grant-giving on tax forms, spending for the current financial year will not be available until after 2020. Even when that information is made public, Sixteen Thirty would not be required to disclose how much it appropriates for every project it sponsors.

Open Secrets researchers noted that this framework “makes it virtually impossible to determine who funds the group and how that money is being spent.”

“It is not entirely uncommon for a 501(c)(4) to act as a fiscal sponsor for another organization, but it is unusual that a group planning to spend millions influencing politics would be structured in this way,” Fischer told The Daily Caller News Foundation. “As the Center for Responsive Politics documented, this arrangement allows Demand Justice to dodge even the minimal reporting obligations required for a 501(c)(4).”

It also financed a four-day spot on Indiana stations supporting Sen. Joe Donnelly, a Democrat who is under intense pressure to support Kavanaugh’s confirmation. Donnelly is one of several Democratic senators standing for re-election in November in states President Donald Trump carried comfortably in 2016.