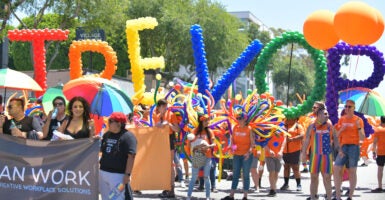 The author's school district collaborates with The Trevor Project, which describes its mission as seeking “to end suicide among lesbian, gay, bisexual, transgender, queer, [and] questioning young people.” Pictured: The Trevor Project is represented at a Pride event on June 7, 2019, in West Hollywood, California. (Photo: Rodin Eckenroth/WireImage/Getty Images)

As a former school board member and currently a public school teacher of 30 years, I want to share some information with parents that school districts won’t tell them.

Under a program called Multi-Tiered Systems of Support, many outside agencies have access to students without parental knowledge or consent.

Many of those agencies provide mental health support either in school (via wellness centers) or through virtual platforms using crisis phone numbers, suicide hotlines, text messaging, or Instagram.

Many of those agencies advise kids that there are myriad genders to choose from and that they can make up their own gender. They also send them into “chat spaces,” where minors are mixed with random adults to “explore” their gender or “sexuality” in a “welcoming” space.

The following are several examples:

I tested it out and texted, “I’m scared about puberty and unsure of my gender. What should I do?” Planned Parenthood sent me auto-text messages asking me to select a gender. It gave me these options: boy, girl, cisgender, genderfluid, intersex, nonbinary, questioning, transgender, something else, or name your own.

After I clicked the button that said “What should I do if I identify as another gender?” Planned Parenthood sent me text messages explaining puberty blockers, explaining that they allow kids more time to decide their gender.

Then it sent me a way to make an appointment with the nearest Planned Parenthood clinic for “gender-affirming care.” This was all done without parental knowledge or consent. I took screenshots of every text it sent me.

Another example is The Trevor Project, which describes its mission as seeking “to end suicide among lesbian, gay, bisexual, transgender, queer [and] questioning young people.”

My school district works with The Trevor Project and provides suicide or crisis hotline numbers in every student bathroom from preschool to high school. The Trevor Project Lifeline is 1-866-488-7386. Students also can text HOME to 741-741, the National Suicide Prevention Lifeline.

I texted the same question—“I’m anxious about puberty and unsure about my gender. What should I do?” The “lifeline” sent me information about many gender options, sent me chat spaces I could join with random adults, and asked the typical suicide questions, the answers to which are intended to ensure I wouldn’t harm myself.

When I was a school board member, the local children’s hospital requested a five-year partnership with our district to provide free mental health services to students.

Because this sounded too good to be true, I inquired further. I learned that the Children’s Hospital of Orange County not only added a new pediatric psychiatric clinic, but it also added a pediatric gender clinic.

When I sent email questions about the new gender clinic, I learned that it was socially transitioning children at age 5 and medically transitioning children at age 9. The head endocrinologist sent me the protocols they used to train their mental health workers concerning gender-identity issues, which were the World Professional Association for Transgender Health and the University of California of San Francisco Standards of Care.

Both these documents clearly state that mental health workers should only affirm a child’s gender identity, no matter the age of the child and no matter what the gender identity or pronouns the child thinks are right for him, her, ze, they, nos, hir, xir, etc.

The job of the mental health worker is to help parents also affirm whatever gender(s) children think best fit them, whether it be both genders, neither gender, genderfluid, transgender, or something else on the unlimited gender spectrum.

The documents also state that medical treatments are the best answer to treat or cure gender dysphoria, regardless of the risks; regardless of whether or not they are approved for that purpose by the federal Food and Drug Administration; and regardless of the lack of longitudinal studies and research into those treatments.

In fact, the most recent version of the World Professional Association for Transgender Health manual, now in draft form, added a chapter called “Eunuchs.” This chapter normalizes eunuchs and says prepubescent boys may voluntarily choose chemical or physical castration so their bodies will align and be congruent with their authentic self.

The document states that prepubescent castration potentially can add years to a person’s life.

These mental health workers, who are trained according to the World Professional Association for Transgender Health and University of California at San Francisco Standards of Care through the children’s hospital, are working with our children in our schools’ wellness centers under the program of Multi-Tiered Systems of Support.

However, parents are not aware of how these mental health workers are being trained.

In the elementary school where I teach, we have new mental health workers being hired right out of college.

I asked one of them: “How were you trained to define gender identity?” She said, “That gender is a child’s choice.” I asked, “If a kindergartner tells you he believes he’s both genders, how are you trained to deal with that?” She responded, “To affirm whatever he says he is, including his pronouns.”

I said, “If the kindergartner says, ‘Please don’t tell my parents, because they won’t like this,’ what are you trained to do?” She said, “We must keep it confidential until children feel comfortable to ‘come out’ publicly about their gender identity, and that includes parents, because we need our school to be a safe place.”

What if the child wants to test out his perceived wings? Must the mental health worker encourage the delusion of dangerous or possibly fatal feats?

The Centers for Disese Control and Prevention affirms unlimited gender choices. In its glossary, it defines nonbinary as gender creative, which means kids can make up their own genders. It says nonconforming genders are marginalized minorities and cisgenders (biological genders) are implied to have privileged supremacy.

The CDC funds Advocates for Youth, which wrote our 2020 National Sex Ed Standards, which explains all of those many genders. The standards even state that denial of resources such as puberty blockers or hormone therapy may be considered “gender-based violence” and that kids should learn about puberty blockers in the third to fifth grades.

Students can ask sensitive questions to Amaze through Instagram via #AskAmaze. This “confidential” feature may be provided through schools through the “Rights, Respect, Responsibility” curriculum online, which is free and is said to meet all CDC recommendations for sex education.

In conclusion, besides controversial curriculums, parents also need to be aware of the many virtual platforms where outside agencies are counseling and advising your children without your knowledge or consent.

The CDC and the California Department of Education both encourage many outside agencies to partner with schools in order to meet the needs of the “whole child.”

School choice can help stop the teachers unions’ monopolization of public education, and with it many of these surreptitious anti-parent programs.