The Reckless Push for Electric Vehicles at US Postal Service 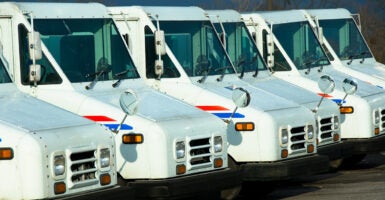 Progressives pulled out all the stops to provide the U.S. Postal Service with electric vehicle funding in 2021 and will likely double down in 2022. (Photo: mcdomx/Getty Images)

Paul Steidler is a senior fellow at the Lexington Institute, a public policy think tank based in Arlington, Virginia.

As Democrats regroup and forge ahead with plans to implement components of the Build Back Better legislation killed by Sen. Joe Manchin, D-W.Va., calls for the U.S. Postal Service to be given billions to electrify its vehicle fleet are likely to soon reach a fever pitch.

The Postal Service is a high-profile, well-regarded institution through which progressives want to unveil new programs. Progressives pulled out all the stops to provide the Postal Service with electric vehicle funding in 2021 and will likely double down in 2022.

Republicans and fiscal conservatives in Washington, D.C., should push back hard. Electric vehicle subsidies for the Postal Service epitomize what is wrong in Washington, D.C., and how proven, time-tested financial restraint and related guardrails are being eviscerated.

The Postal Service plans to purchase a combination of electric and fuel-efficient internal combustion engine vehicles, all of which are markedly cleaner than the current vehicles that are an average of 25 years old.

For fiscal year 2022, Build Back Better provides $2.6 billion for the Postal Service to purchase electric vehicles and $3.4 billion to construct charging and related infrastructure to support such vehicles. It is the first step in progressives’ push to make all Postal Service delivery vehicles electric by 2028 and to also require all Postal Service medium- and heavy-duty trucks to be electric.

There are three fundamental reasons to strongly oppose electric vehicle funding to the Postal Service.

US Postal Service Has Cash to Buy Electric Vehicles Now

For the quarter ending Sept. 30, 2021, the Postal Service reported having $23.9 billion in cash, nearly four times what Congress wants to provide.

The Postal Service also received $10 billion in COVID-19 relief funds even though the pandemic provided a catalyst for its business by significantly increasing the demand for package shipments. And keep in mind, the Postal Service plans to purchase and pay for its new fleet over 10 years.

A central pillar of the 1970 Postal Reorganization Act is that the Postal Service is to cover its costs through the sales of products and services. Electric vehicle funding amounts to congressional interference in the Postal Service’s operations.

The $3.4 billion in charging infrastructure will require ongoing management, distracting from the central public duty to deliver mail most efficiently. It will also pressure, if not box-in, the Postal Service to only purchase electric vehicles in the years ahead, potentially driving up costs astronomically.

Special Interests Benefit the Most

In congressional testimony on March 11, Postmaster General Louis DeJoy said that 5,000 packages take up the same amount of space as 500,000 letters. As such, the new vehicles will be used predominantly to deliver packages. Any public funding of electric vehicles is likely to thus disproportionately benefit the large retailers who send many packages more than those who still rely on the Postal Service for mail.

One legislative measure that progressives are likely to target for the electric vehicle funding is the Postal Service Reform Act, which has bipartisan support in the House and Senate. The measure already provides more than $46 billion in balance sheet and other financial relief to the Postal Service related to financial challenges from the decline in mail volume.

Including electric vehicle funding as part of postal reform would amount to sanctioning heavy-handed congressional management of the Postal Service by dictating what vehicles it operates and saddling it with this permanent obligation. Not only should such an electric vehicle amendment be opposed, but the entire “reform” package should be voted down if it has this troubling feature.

At a time when mail delivery is slower than it was in the 1970s, and the Postal Service has major financial challenges, electric vehicle subsidies and corresponding congressional interference will only make these matters worse, while doing little to curb greenhouse gas emissions.