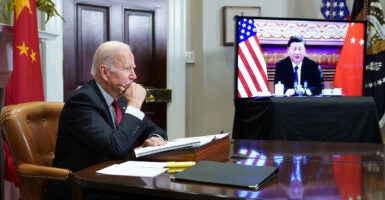 President Joe Biden and Chinese President Xi Jinping spoke for three and a half hours on Monday without reaching any new agreements or making new plans. Pictured: Biden attends the virtual summit with Xi in the Roosevelt Room of the White House. (Photo: Mandel Ngan/AFP/Getty Images)

Given the low expectations each side brought to the virtual summit between President Joe Biden and Chinese President Xi Jinping on Monday, it is not surprising that little appears to have been achieved in the course of the three and a half hour meeting.

No agreements were planned or emerged. Indeed, a number of topics that had been hinted at, including an invitation to the 2022 Winter Olympics from Xi to Biden, did not arise.

Press coverage indicates that there was a great deal of discussion of Taiwan. The Chinese side warned that Taiwan was pressing for independence (largely by refusing to accede to Chinese demands), and that the United States was risking conflict by its support for the island. The American side reiterated its longstanding opposition to unilateral changes in the security situation in the Taiwan Strait.

Both sides sought to portray their relationship as one where tension is receding. Often cited in various news reports is Xi referring to Biden as his “old friend.” Nonetheless, on trade issues, human rights, as well as Taiwan, no evidence of some kind of compromise or even convergence emerged from this meeting.

China’s growing military capabilities, including its recent hypersonic weapon test, were apparently not addressed. And while climate change was apparently discussed, the reported agreement at COP26 between special climate envoys John Kerry and Xie Zhenhua to cooperate on reducing greenhouse gas emission was not referenced. Nor was any progress made in determining the origins of the COVID-19 virus, which continues to ravage the world.

Indeed, at the end of the day, the virtual meeting appears to be the worst form of summitry: a meeting simply for the sake of meeting. As the two sides appeared to simply present a laundry list of grievances, it seemed to be more akin to a Seinfeldian Festivus (the summit for the rest of us?) than any kind of discussion of the issues that separate Beijing and Washington.

What remains to be seen is what policies each side will pursue through 2022. For both Biden and Xi, the coming year will be one filled with pressing political challenges.

For Biden, the challenge will be to fulfill as much of his agenda as possible as we approach mid-term elections. With rising inflation, exacerbated by supply chain disruptions and rising energy prices, Biden faces significant challenges to maintaining his party’s grip on both houses of Congress.

For Xi, the path appears easier, especially as his position within the Chinese Communist Party was recently enshrined. Nonetheless, in his effort to retain his position as general secretary of the Chinese Communist Party at the forthcoming 20th Party Congress, he will have to make political deals. This will be complicated by domestic economic turmoil (including from an imploding real estate bubble), as well as energy shortages and a renewed COVID-19 threat.

Ironically, Biden may have strengthened Xi’s hand. Biden assumed the role of supplicant by asking China for the summit, allowing Xi to posture as the stronger of the two. Xi will be able to argue that it is the U.S. that comes hat in hand to him, whether in person at Anchorage and Tianjin or virtually in this summit.

Amidst all these challenges, neither the United States nor the People’s Republic of China necessarily want a military confrontation, but both sides clearly remain adamant in defending what each sees as “core interests.” Years of declining relations, including economic distancing and alienation, has meant that a previous underlying foundation—that of economic and trade ties—are now frayed, and even contributing to the tensions between the two nations.

It was hoped that this summit might arrest this decline in relations. Yet, there is little evidence that there was any meeting of the minds on any of the key issues. The prospects for 2022 do not appear upbeat.