Are Parents Being Tagged as ‘Domestic Terrorists’ by the FBI? Justice Department Needs to Show Its Cards 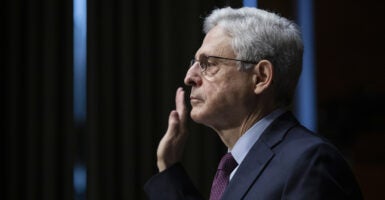 It is time for Attorney General Merrick Garland and the FBI to lay their cards on the table—and fast—or else they will find themselves enveloped in a burgeoning scandal that will further damage their already-teetering reputation and in a way that will do lasting damage to free speech.

In a recent letter, Rep. Jim Jordan, R-Ohio, told Garland that information received from a whistleblower has called “into question the accuracy and completeness” of testimony that Garland gave before the House Judiciary Committee on Oct. 21.

This is serious business.

It is no secret that many parents are upset, and understandably so, about the fact that their young children are being taught critical race theory, with teachers making students stand in privilege circles, dividing them into categories of “oppressor” and “oppressed” based solely on their skin color and ethnicity, compelling white students to apologize for their “whiteness,” assigning students to read highly politicized books and essays promoting the controversial 1619 Project and the view that our society is systemically racist, and other things of that ilk.

Promoters of critical race theory are unapologetic and respond, as former Virginia Gov. Terry McAuliffe recently did, “I don’t think parents should be telling schools what they should teach.”

Suffice it to say, they are not pleased that school board races have been getting more national and local attention than ever before, and parents across the country have been making their displeasure known in articles, in letters to the editor, and at public meetings.

Not content to make their case in the court of public opinion, the National School Boards Association took things to an entirely new and completely inappropriate level.

In a Sept. 29 letter to President Joe Biden, the president and the interim executive director and chief executive officer of the National School Boards Association informed the president that “America’s public schools and its education leaders are under an immediate threat.”

Citing a few examples of disturbances at school board meetings by individuals who were upset about mask mandates and critical race theory curricula—all of which were, presumably, ably handled by state and local authorities or by the school boards themselves—and stating that such incidents were “impacting the delivery of educational services to students and families,” the letter implored Biden to deploy the Justice Department, the FBI (including its national Security Branch and Counterterrorism Division), the Department of Homeland Security, and the U.S. Secret Service (including its National Threat Assessment Center) to combat this supposed scourge.

The letter stated, without providing support, that “extremist hate organizations” were showing up at school board meetings, and that these protests should be characterized as “equivalent to a form of domestic terrorism and hate crimes.”

The letter stated that federal law enforcement authorities should employ the full array of tools at their disposal, including the Patriot Act, against these perpetrators of “domestic terrorism.”

In a memorandum issued shortly thereafter (and in a series of internal emails that were written prior to the memorandum), the president of the National School Boards Association informed its state association officers and executive directors about the letter and added that it had been actively engaged with the White House and the Department of Justice, among others, for “several weeks” about the “growing threats” to its members.

The memorandum went on to claim that “[i]n response to its letter,” the attorney general issued a memorandum “ordering all U.S. Attorney Offices and local FBI offices to reach out to local and state law enforcement officials to coordinate efforts.”

Issued only days after the National School Boards Association letter to Biden, the Garland memo—dated Oct. 4 and issued to FBI Director Chris Wray, the Executive Office of U.S. Attorneys, the head of the department’s Criminal Division, and all 93 U.S. attorneys—stated that the Justice Department would shortly be announcing “a series of measures designed to address the rise in criminal conduct directed toward school personnel” and directed the recipients to convene meetings with local leaders within 30 days to discuss strategies to address the situation and to “open lines of communication for threat reporting, assessment, and response.”

The backlash was immediate. During his Oct. 21 testimony before the House Judiciary Committee, Garland admitted that while he didn’t have any details about the number of threats that had been made against school officials, he acknowledged reading the National School Boards Association letter and relying upon its representation that there has been a spike in violent conduct and threats against school officials. He also stated, “We read in the newspapers reports of threats of violence.”

Garland admitted, though, that he could not “imagine any circumstance in which the Patriot Act would be used in the circumstances of parents complaining about their children, nor … a circumstance where they would be labeled as domestic terrorists.”

He further testified, “I do not think that parents getting angry at school boards for whatever reason constitute domestic terrorism. It’s not even a close question.” It is this testimony that Jordan now claims was false or, at least, misleading, although Jordan acknowledges that perhaps Garland did not know when he testified about the actions the FBI had taken in response to his memo.

The day after Garland testified before the House, the National School Boards Association apologized for its Sept. 29 letter and stated that “there was no justification for some of the language included in the letter.”

A week later, on Oct. 27, Garland testified before the Senate Judiciary Committee and refused to back down. He informed its members that he stood behind his memo, stating that it did “not say to begin prosecuting anybody,” and that it had “nothing to do with politics.”

Garland said he did not rely on the National School Boards Association letter in preparing and issuing his memorandum, and added that he didn’t “think it’s reasonable to read this memo and think it’s chilling anyone’s rights.”

In his letter, Jordan informed Garland that he had received a memorandum from an FBI whistleblower, dated the day before Garland’s testimony before the House Judiciary, in which two high-ranking FBI officials informed all of its field offices:

As a result [of the Garland memo], the Counterterrorism and Criminal Divisions created a threat tag, EDUOFFICALS, to track instances of related threats. We ask that your offices apply the threat tag to investigations and assessments of threats specifically directed against school board administrators, board members, teachers, and staff. The purpose of the threat tag is to help scope this threat on a national level and provide an opportunity for comprehensive analysis of the threat picture for effective engagement with law enforcement partners at all levels.

Perhaps. There is, of course, a big difference between investigating an actual threat of physical violence against someone and investigating a concerned parent who expresses his or her views at a school board meeting.

If, in fact, the FBI has no evidence of any threats of physical violence and is applying this tag to upset parents who show up at school board meetings to express their displeasure, that would be outrageous and heads should roll.

If, on the other hand, the FBI has lots of information about actual threats or instances of physical violence against school officials, that would be very different.

So far, at least, the only prominent example of anyone making a threat at a school board meeting that has been disclosed did not involve a concerned parent threatening a school board official, a teacher, or a school administrator.

Rather, it involved a supporter of critical race theory, who irately informed parents that if they continued to complain about the indoctrination to which their children are being subjected, he would return next time with “over 1,000 soldiers ready to go” who are “locked and loaded.”

The FBI has responded to all this by saying that it “has never been in the business of investigating parents who speak out or policing speech at school board meetings, and we are not going to start now,” and that it remains “fully committed to preserving and protecting First Amendment rights, including freedom of speech.”

In other words, nothing to see here, just move along.

Nope. Not this time. Not good enough. Not even close.

The FBI’s reputation is in serious jeopardy. Recent reports of Foreign Intelligence Surveillance Act abuse and credible claims that the upper echelons of the FBI hierarchy acted in a highly partisan manner in connection with its investigation of former President Donald Trump and many of those who worked on his campaign or in his administration have shaken the public’s confidence in the most powerful law enforcement agency in this country.

Additionally, there is a dark period in the FBI’s history in which it conducted a covert counter-intelligence surveillance program—dubbed COINTELPRO—in which it infiltrated and discredited domestic political organizations and individuals that were engaged in First Amendment-protected political speech and activities, but which the FBI deemed to be “subversive.”  The public needs to be reassured in a convincing and prompt manner that history (including recent history) is not repeating itself, and that the FBI is not just doing the bidding of a powerful political ally of the Biden administration.

So far, at least, the biggest threats that the public has seen is the threat of a massive chilling effect on those who want to exercise their First Amendment rights and the threat to the Department of Justice’s and the FBI’s reputation.

The public needs to be reassured that parents who speak up at school board meetings about their children’s education are not going to find themselves in an FBI database with a “threat tag” next to their names or, even worse, find themselves under investigation or placed in handcuffs and dragged away by federal authorities.

Garland and Wray should return to the House and Senate Judiciary Committees to answer some tough questions about all of this.

Likewise, the FBI should disclose—with as much specificity as possible—how many threat cases it is investigating, the precise nature of the alleged threats, the federal crimes that may be implicated, and why the bureau believes that state and local authorities are incapable or insufficient to investigate these cases.

A previous version of this article incorrectly stated that the date of Garland’s Senate Judiciary Committee testimony was Sept. 27. It has been corrected to say Oct. 27.