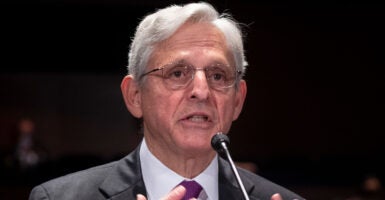 Attorney General Merrick Garland denied any knowledge Thursday of a highly publicized Northern Virginia school rape case and suggested that he called for federal investigations of parents without independently confirming a purported spike in threats made to school boards and teachers.

During the hearing before the House Judiciary Committee, Republican lawmakers grilled the attorney general for several hours over his Oct. 4 memo calling on the FBI and the Justice Department to address supposed “violent threats” against teachers and school boards.

“Threats against public servants are not only illegal, they run counter to our nation’s core values,” wrote Garland in the Oct. 4 Justice Department announcement. “Those who dedicate their time and energy to ensuring that our children receive a proper education in a safe environment deserve to be able to do their work without fear for their safety.”

The National School Boards Association letter cited the arrest of a Loudoun County man as evidence that “threats and acts of violence” are endangering school board members. The letter links to a local news story on the incident and refers to “an individual” who was arrested.

But the aforementioned individual is Scott Smith, the father of a girl allegedly raped in her school restroom by a boy wearing a skirt.

“I don’t know anything about this case,” Garland told Rep. Chip Roy, R-Texas, later adding, “This sounds like a state case, and I’m not familiar with it.”

Though the alleged Loudoun County school rape is a state case, it has received national and even global attention over the past couple of weeks, a worst-case scenario situation that opponents of radical school policies have long predicted.

Smith told The Daily Wire that he was arrested at the June 22 school board meeting after Loudoun County Public Schools Superintendent Scott Ziegler claimed that “the predator transgender student or person simply does not exist,” adding: “We don’t have any record of assaults occurring in our restrooms.” Smith reportedly grew angry and began to argue, resulting in his arrest.

During the Thursday hearing, Roy questioned Garland repeatedly about the circumstances surrounding the alleged rape and the arrest of the girl’s father, asking the attorney general whether the FBI and the Justice Department are investigating the Loudoun County School Board.

“I don’t believe so, but I don’t know the answer to that,” Garland responded.

“Why not?” Roy asked, reminding Garland of Ziegler’s June 22 comments. “When this statement bothered the father of the girl … the girl who had been raped, sodomized in the bathroom of a high school by a dude wearing a skirt, that father reacted. Now, that father reacted by simply using a derogatory word. Would that statement have bothered you if your daughter had been raped?”

“Again, I don’t know anything about the facts of this case, but derogatory words are not what my memorandum was about,” Garland said.

2) Garland Suggests He Didn’t Do His Homework

In the attorney general’s early October memorandum, he cited “a disturbing spike in harassment, intimidation, and threats of violence against school administrators, board members, teachers, and staff.”

But Thursday’s hearing indicates that Garland merely took the word of the National School Boards Association on the supposed “disturbing spike.” The Justice Department did not immediately return a request for comment from The Daily Signal on that point.

Rep. Jim Jordan, R-Ohio, aggressively questioned Garland about where the attorney general had found data showing the reputed spike in threats against teachers.

“I read the letter,” Garland responded, “and we have been seeing over time … .”

“Whoa, whoa, whoa,” Jordan interrupted him. “So, you read the letter? That is your source? Is there some study, some effort, some investigation someone did that said there has been an uptick, or you just take the words of the National School Boards Association?”

“The National School Boards Association, which represents thousands of school boards and school board members, says there are these kinds of threats,” Garland said, adding that “we read in the newspapers reports of threats of violence.”

The attorney general offered little further insight on his memorandum throughout the hearings, sticking to short responses and promising that he respects Americans’ First Amendment rights.

“Every person living in this country expects and deserves that their government protect them against a wide range of threats—from international and domestic terrorism to cyberattacks to violent crime and drug trafficking,” Garland said in prepared remarks at the beginning of the hearing.

“As our country’s chief law enforcement officer, I am committed to supporting law enforcement at all levels as they work to protect our country from these threats, while also zealously guarding civil liberties and ensuring our own accountability to the American people,” he added.

Garland pushed back on suggestions that he was calling parents “domestic terrorists,” telling Rep. Steve Chabot, R-Ohio, that his memo did not mention either the Patriot Act or domestic terrorism.

“I can tell you, not in a million years did we dream that one day we would see the Justice Department treat American parents as ‘domestic terrorists,’” Chabot told Garland.

“Like you, I can’t imagine any circumstance in which the Patriot Act would be used in the circumstances of parents complaining about their children, nor can I imagine a circumstance where they would be labeled as ‘domestic terrorists,’” Garland told the Ohio lawmaker.

Rep. Mike Johnson, R-La., also called for an investigation during the Thursday hearing into the attorney general’s actions, suggesting that Garland was “motivated” by his “family’s financial stake in this issue.”

The congressman was referring to reports that Garland’s memo presented a conflict of interest in relation to his son-in-law’s education company, Panorama Education, which carries out race-focused surveys and training described as “social-emotional learning.”

The company is open about the fact that “social-emotional learning,” the Washington Examiner reported, is a “vehicle” for achieving the company’s equity goals.

“Published reports show that your son-in-law co-founded a company called Panorama Education,” Johnson told Garland. “We now know that company publishes and sells critical race theory and so-called anti-racism materials to schools across the country, and it works with school districts nationwide to obtain and analyze data on students, often without parental consent.”

The congressman asked Garland whether he was familiar with Title V of the Code of Federal Regulations addressing rules of impartiality for executive branch employees and officials.

“I am very familiar with it,” the attorney general responded. “I want to be clear once again that there’s nothing in this memorandum which has any effect on the kinds of curriculums that are taught or the ability of parents to complain.

“There is no company in America or hopefully no law-abiding citizen in America who believes that threats of violence should not be prevented,” Garland told the congressman, who argued that parents are protesting the very sorts of curriculum that Garland’s son-in-law sells. “There are no conflicts of interest that anyone could have.”