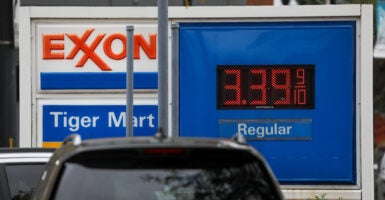 U.S. oil prices hit their highest levels since 2014 on Oct. 7 due to the deepening energy crisis in global markets, as reflected in the pump prices at this Washington, D.C., filling station. The Biden administration is finally taking notice. (Photo: Yasin Ozturk/Anadolu Agency/ Getty Images)

A top White House official said there was an “energy crisis” in the U.S. and urged foreign fossil-fuel producers to ramp up production to quell it.

“We see this as an energy crisis because this is not just natural gas prices that have been elevated, but crude oil is at very high levels at the moment … and gasoline prices in the United States today are at seven-year highs as natural gas peaks at the same time,” White House energy adviser Amos Hochstein remarked during a virtual event hosted by the International Energy Forum on Thursday. “So I think this is an energy crisis.”

Hochstein, who served as an energy adviser in the State Department during the Obama administration, added that foreign energy producers were responsible for balancing the oil and gas markets. He also hinted that President Joe Biden would address the issue during upcoming international summits in Rome and in Glasgow, Scotland.

“Some of the solutions that I think you’ll hear the president talk about are similar in both the oil and gas and that is that producers have a responsibility to ensure that oil markets and gas markets are balanced,” Hochstein said on Thursday.

Biden and German Chancellor Angela Merkel approved Gazprom’s gas pipeline Nord Stream 2, potentially making Europe even more dependent on Putin for its energy. Russia provides 41.1% of Europe’s natural gas and 26.9% of its crude oil, the largest share of any producer, according to European Union data.

Energy costs—including heating and gasoline prices—have surged in both Europe and the U.S. over the past several months. But while the U.S. has access to many of its own oil and gas resources, the Biden administration has repeatedly asked Middle Eastern and Russian producers to boost output to solve the issue.

“[Europe’s energy crisis is] a real warning for American consumers and the world, that if you don’t create your own supply at home, you’re dependent on supplies from regimes that don’t necessarily have your interests at heart,” American Petroleum Institute President Mike Sommers said during a House hearing Thursday.

“And I think the Europeans, and other parts of the world, are finding out the importance of creating supply to ensure that we have access to affordable and reliable energy for decades and decades to come here in this country,” he continued.

The American Petroleum Institute and other fossil fuel industry trade groups have advocated against several Biden administration policies that they argued would make the U.S. less energy independent.

The White House didn’t respond to a request for comment.

Content created by The Daily Caller News Foundation is available without charge to any eligible news publisher that can provide a large audience. For licensing opportunities of this original content, contact [email protected].