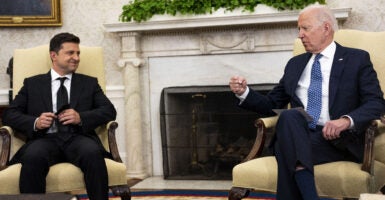 Biden and Zelenskyy focused on security against Russian aggression, anti-corruption initiatives, and energy and climate goals, according to the White House.

“We have to focus very much now on the security issues, which are the most important,” Zelenskyy said through an interpreter, according to the White House pool report.

The Ukrainian president was referring to the Donbas region of Ukraine and Crimea that he said is “occupied by the Russian Federation.”

“We are very much concerned, as you are, with the commissioning of—possible commission on the Nord Stream 2,” Zelenskyy said, according to a transcript. “And I would like to discuss with President Biden here his vision, his government’s vision, of Ukraine’s chances to join NATO and the time frame for this accession, if it is possible.”

Biden said he wanted “a Europe whole, free, and at peace.”

“I would like to use this occasion to thank President Biden for following up on our conversation on the phone and dispatching more than 2 million vaccines to save Ukrainian lives. And thank you for the $60 million program for defense development of Ukraine, we appreciate this contribution,” Zelenskyy said.

In the past year, the United States has given more than $400 million in security assistance to Ukraine, the senior administration official said. Since 2014, when Russia invaded Crimea, the U.S. has given $2.5 billion to Ukraine.

In short comments to reporters in the Oval Office, Biden and Zelenskyy didn’t discuss the Ukraine angles of the 2019 impeachment of Trump. They also didn’t take questions from reporters.

White House press secretary Jen Psaki later said that the two leaders did not talk about the 2019 phone call in which Trump and Zelenskyy discussed the role of Biden’s son, Hunter Biden, on the board of Ukrainian energy giant Burisma Holdings.

Sitting with the Ukrainian leader, Biden told reporters: “I still remember the opportunity that I had to speak to the Rada [Ukraine’s parliament] years ago, and I look forward to being able to come back some day to see you.”

During their July 2019 call, Trump and Zelenskyy also discussed what role Biden, as vice president, might have played in stopping an official Ukrainian investigation into Burisma by leveraging a $1 billion U.S. loan to Ukraine.

In January 2018, during an address to the Council on Foreign Relations, Biden recalled a December 2015 conversation in Kyiv with Zelenskyy’s predecessor, Petro Poroshenko, and then-Ukrainian Prime Minister Arseniy Yatsenyuk about firing Ukrainian Prosecutor General Viktor Shokin, who was investigating Burisma.

“I had gotten a commitment from Poroshenko and from Yatsenyuk that they would take action against the state prosecutor,” Biden said on camera during the 2018 event, referring to Shokin.

Biden said he told the Ukrainian leaders: “I’m leaving in six hours. If the prosecutor is not fired, you’re not getting the money.”

Biden added, referring to Shokin: “He got fired and they put in place someone who was solid at the time.”

Biden and his defenders have said the U.S. was concerned that Shokin wasn’t prosecuting public corruption cases, but Trump and his supporters argued that Biden was trying to derail a probe of Hunter Biden and Burisma, his employer.

On Wednesday, the two presidents also were set to discuss Zelenskyy’s anticorruption reforms aimed at protecting the independence of institutions, the senior administration official said.

This was the first meeting between Biden, 78, and Zelenskyy, 43, but the two had spoken twice by phone. One of the two calls was in June, before Biden’s summit with Putin in Geneva.

Zelenskyy, a former comedian and entertainer, arrived Monday in Washington. His meeting with Biden originally was scheduled for that day, but was delayed until after the final U.S. military evacuation from Afghanistan.