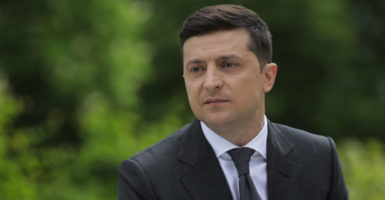 Ukrainian President Volodymyr Zelenskyy made it clear last week that, with the pandemic under control inside Ukraine, he is open to holding direct peace talks with Russian President Vladimir Putin. Pictured: Zelenskyy talks to media during his media conference in Kyiv, Ukraine, May 20, 2020. (Photo: Sergii Kharchenko/NurPhoto via Getty Images)

KYIV, Ukraine—As Ukraine’s coronavirus lockdown incrementally winds down, Kyiv is pivoting its focus back to ending the war in the eastern Donbas region, where Ukrainian troops have held a Russian invasion force at bay since spring 2014.

At a press conference last week to mark his first year in office, Ukrainian President Volodymyr Zelenskyy made it clear that, with the pandemic under control inside Ukraine, he is open to holding direct peace talks with Russian President Vladimir Putin.

With a population 3.4 times that of Ukraine’s, Russia has more than 16 times the number of Ukraine’s total 20,148 reported COVID-19 cases.

Russia had reported a total of 326,448 COVID-19 cases as of May 22. Putin has taken a hit in his popularity among the Russian people due to his government’s management of the coronavirus crisis.

Many in Russia believe Moscow is hiding the true toll of the pandemic, underreporting the numbers of infections and deaths.

In 2014, the United States and the European Union levied punitive economic sanctions on Moscow for its aggression in Ukraine. Now, Russia is facing an additional economic pinch as American liquefied natural gas and oil deliveries ramp up in Central and Eastern Europe, reducing Russia’s share of the market.

Thus, on top of the global drop in oil prices and fallout from the coronavirus pandemic, many say Russia’s economy is facing a crisis. And some say that economic pressure ultimately could spur Putin to the negotiating table with Zelenskyy.

“Against such a background, a new round of negotiations would make sense, as the Kremlin may be more willing to compromise under the currently increasing socio-economic pressure,” said Andreas Umland, senior expert at the Ukrainian Institute for the Future.

“If one assumes more or less rational calculations in the Kremlin, then ending the EU’s Donbas-related sanctions could be higher on the agenda today than before the corona crisis,” Umland told The Daily Signal.

Ending the war was a key campaign pledge for Zelenskyy, 42, a former comedian with no previous political experience who swept last year’s presidential election in Ukraine by a historic margin over his predecessor, Petro Poroshenko.

In a bid to jump-start peace talks, Zelenskyy met Putin in Paris for peace talks in December alongside French and German leaders. It was the first meeting between Zelenskyy and Putin.

The Paris talks resulted in several high-profile prisoner exchanges between Kyiv and Moscow, but produced no serious reduction in violence in the Donbas.

Tens of thousands of Ukrainian troops remain dug in in trenches and ad hoc forts along a roughly 250-mile-long, static front line in the Donbas. They face a combined force of Russian regulars, pro-Russian separatists, and foreign mercenaries.

Despite the coronavirus pandemic and last year’s Paris peace talks, the war has plugged along at its yearslong status quo, marked by daily artillery exchanges, sniper shots, and a slow trickle of military and civilian casualties.

It’s a trench war not unlike the Western Front in World War I—albeit on a much smaller scale and with certain modern trappings such as drones and electronic warfare. Combat is mainly fought at a distance by snipers, artillery, and the occasional tank shot.

Amid seven cease-fire violations by the Russian side May 21, one Ukrainian soldier died “due to enemy shelling,” according to Kyiv. And the next day, a Ukrainian soldier was wounded by shrapnel from a grenade dropped from a Russian drone, Kyiv reported. Both sides have used modified, small drones to drop hand grenades.

The war in the Donbas began as a Russian hybrid offensive in spring 2014. When Ukrainian forces gained the upper hand that summer, Russia threw thousands of its own troops into the conflict—which had by then become a mechanized, conventional war.

Signed in February 2015, the Minsk II cease-fire limited the intensity of combat by proscribing the use of certain heavy weapons, as well as airpower. But fighting never ended and the war’s casualties have more than doubled since the cease-fire went into effect.

Neither side is fighting to achieve a breakthrough or take significant new ground. In fact, the front lines have hardly shifted since the signing of the Minsk II cease-fire.

The war so far has killed more than 13,000 and displaced about 1.7 million from their homes. Europe’s only ongoing land war is also the Continent’s biggest humanitarian crisis.

“It is unconscionable that children and families in eastern Ukraine are not only having to cope with the strict lockdown measures all families are struggling with across Europe, but also the constant threat that their homes could come under attack,” Afshan Khan, UNICEF’s regional director for Europe and Central Asia, said in a May 21 press release.

France and Germany—Europe’s principal interlocutors in the Russo-Ukrainian war—remain committed to the so-called Minsk process. So, too, does Russia.

Zelenskyy, for his part, said he is willing to consider a separate track for peace negotiations outside the framework of Minsk II’s terms.

“The Minsk format is a priority, but … I am ready for any format that can bring us closer to the end of war and the return of our territories and people. To any format. I do not care. We need results,” Zelenskyy told reporters May 20.

Since the war stalemated in late 2014, Russia has sustained the so-called separatists with weapons, ammunition, training, money, as well as with Russian troops. The Kremlin, however, claims that it’s not involved in the conflict, and any peace plan should grant the separatist territories a special, autonomous status within Ukraine.

Kyiv, meanwhile, sees the war as a Russian invasion, not a separatist uprising, and maintains a longstanding policy of negotiating only with Russian representatives rather than with so-called separatist leaders.

Ukraine went on national lockdown in March to slow the spread of COVID-19, the disease caused by the novel coronavirus. In mid-May Ukrainian officials announced the incremental lifting of some of those measures.

Ukrainian life is inching back toward normality. Gyms and kindergartens are reopening, and public transportation—including intercity train travel—is set to resume. International air travel presumably will restart in mid-June.

For now, Ukraine seems to have avoided a major outbreak of the disease. The economic consequences of the lockdown, however, likely will last for years, economists say. S&P Global Ratings predicts a 5.5% decline in Ukraine’s gross domestic product in 2020.

With an ongoing war on its territory, some international investors remain skittish about doing business in Ukraine, analysts say. As a result, ending the war is also a key part of Ukraine’s economic recovery from the coronavirus lockdown.